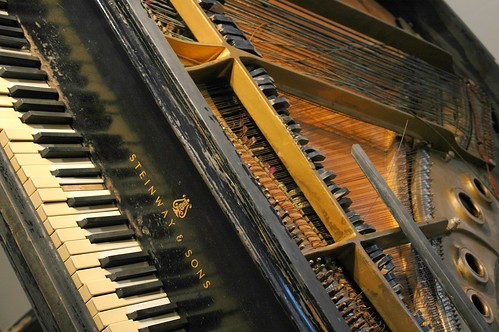 "One doesn't have to be good at meditation, achieve anything or look for any particular results. As with any skill, only practice leads to improvement. And improvement is not even the point. The only point is the practice"
- Dr. Gabor Maté, "In The Realm of Hungry Ghosts"

practice
verb prac·tice \ˈprak-təs\
: to do something again and again in order to become better at it

: to do (something) regularly or constantly as an ordinary part of your life

: to live according to the customs and teachings of (a religion)

Further meditation on the concept of practice: it can take different roles in your life. It could be something you do over and over again towards achieving the goal of mastery. Or it can just become an integral part of your life. In the first instance (or approach, if you will), the ego can easily get in the way: "I want to be better than anyone else", it will tell you. Or: "Be as good/famous/successful as this role model". This is what would only cause you to procrastinate at best, if not completely abandon any practice at all. Make it a part of your life, integrate the practice in your daily, mundane schedule, without worrying about what everyone else will say - and your world will shift entirely. All of a sudden, instead of trying to get from point A (ignorance, or low skill level) to point B (knowledge and mastery) - your goal is to be in the present. The goal is the practice itself. Or, if you wish to attribute an even richer spiritual perspective, it's akin to the Jewish approach of "... for the reward of a mitzvah is a mitzvah" (Avot 4:2).
The full definition of practice (same dictionary):

transitive verb
1 a :  carry out, apply
b :  to do or perform often, customarily, or habitually
c :  to be professionally engaged in

2 a :  to perform or work at repeatedly so as to become proficient
b :  to train by repeated exercises

Here we see that it is the action of applying the knowledge, not just talking or thinking about it, that matters. This frequent performance or repeated action is what will bring one to the level of mastery and professionalism (if that's desired), in which the action itself becomes the way of life. A life of action and doing. A creative and fertile life.

intransitive verb
1 :  to do repeated exercises for proficiency
2 :  to pursue a profession actively
3 archaic :  intrigue
4 :  to do something customarily
5 :  to take advantage of someone

Interestingly, here's where the double-edged sword of automation is fully expressed. Practice can be a repeated action with the goal of proficiency. Like studying the moves in a dance routine until "muscle memory" is achieved. This is not a very high level of mastery, but a necessary step in the process. However, one can be easily stuck in the mechanical, technical aspect, and be paralyzed by it. I've experienced this time and again in all of the creative mediums I've been engaged in throughout my life. Once the initial novelty of the new medium has worn off, I've been often left with an overwhelming sensation of inadequacy. And I've been led to believe that the only solution for that is achieving proficiency. Now, as my recent dancing classes under different instructors have proven: it's great to do some drilling , break down some moves that are complex or challenging, in order to integrate them into your muscle memory. But ultimately, what's most important for dancing (both from the dancer and audience's perspective) is the soul. A dance without soul is lifeless, boring and an eyesore to watch. Or at best an amusing entertainment in which you can see that drilling does hammer certain dance into a body to the point that they can move without belabouring them. But that does not make it an artful or expressive thing. And it misses the point of practice entirely. Ideally, one should move from "exercising" to incorporating the practice into one's life. Rather than doing things "customarily" with a mundane, yawn-inducing attitude - integrating the practice into one's life, and give it the space and time it needs to become soulful, to become an art.

Throughout my childhood, I've been studying music - my piano lessons began in elementary school, even though I had no piano at home. I practiced wherever there was a piano and whenever I had time (i.e.: lunch breaks), at the underground bomb shelter at school, at our neighbour's homes all over the village, and finally at my own home once my parents finally realized I was serious enough to invest in a piano (not to mention make room for it in a very tiny home).

By high school I shifted my focus on classical singing, which was a most profound way of self-expression, with no restrictive intermediaries such as keyboards and piano room scheduling. I could sing anywhere, but preferably where there was an empty space with decent acoustics and no one listening. Of course I will have my weekly lessons where I had to perform in front of my teacher, and there was choir practice and what not. But the most ideal situation was somewhere where the only witnesses would be blind bats and deaf lizards. While I had my fair share of limelight glamour in those highs school days, in a way having an audience was actually detrimental to my self-expression. Especially if the audience was judgemental or critical. Such environment would immediately choke my "instrument". Looking back at those times, I now know that it was precisely those times of practice where the best things were happening. Not everyone is cut to be a performance artists, but that does not mean that when they sing or play or dance at the private of their own home, they are not creating art.


Contrary to the definition of art as we were taught it in the advanced music classes in high school - I do not believe that art is about the audience at all. Art is an internal process that takes place in the creator's psyche, and often in private - in a studio, or in nature, or just at a writer's bedside where they write their day's thought. The audience is only privy to the finished result, which, granted, can be beautiful. But as beautiful and interesting as it may be - it pales in comparison to the process of creation. When you hear an opera singer performing a polished aria in a concert hall - you hear only the result of hours and hours of practice. Hours of many different phases, including just straight forward solfège, diction and technical drilling of the music from one hand; and spilling out raw emotions, perhaps even bursting into real tears and singing in a choked-up voice - that are usually deemed inappropriate to deliver for a larger audience. But they are all part

Once again, we see that the importance of practice is in the act itself. In other words: "Just do it". Don't say that you want to paint, draw or write, run, dance or swim - or whichever practice your soul is hungering for. There is a reason why you're attracted to a certain discipline or another. It's your calling. Listen to it. Act on it. Practice it. Just do it!