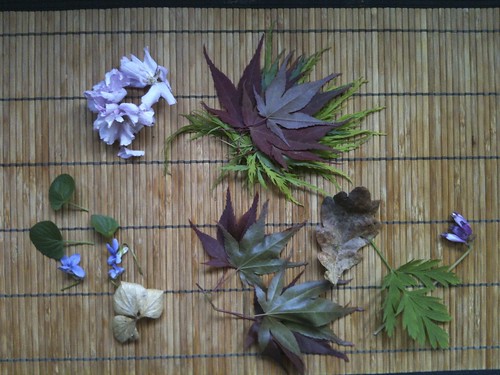 "Having a collection, taking it out, looking at it, reordering it, and putting it away is creative in itself. It doesn't yield a product, like the results of an art, but is stops time, as making art does.”
― Molly Peacock, The Paper Garden: Mrs. Delany Begins Her Life's Work at 72

The notion of artists as collectors is not new to me. It isn't lost on me either. Just like making art, collecting involves seeking and searching, contemplating, arranging, rearranging and editing. And both are driven by an obsession with a particular subject (or few). There are many aspects of collecting that are meditative and contemplative, such as gathering, sorting, organizing.

collection
noun col·lec·tion \kə-ˈlek-shən\
: the act or process of getting things from different places and bringing them together

: a group of interesting or beautiful objects brought together in order to show or study them or as a hobby

: a request for money in order to help people or to pay for something important; also : the money collected in this way

Children like to collect things - rocks, shells, leaves, flowers, bottle caps... Stamps, cards, puppets, dolls, toy cars, stickers and stationary. They'd seek them feverishly, willing to give away a disproportionate chunk of their wealth to acquire the "missing piece"; or gather them sporadically, with mixed levels of interest. They'll keep them somewhere safe and share them with no one, or they'll show them off, trade them, or even give them away (to someone who would really, truly appreciate it as much as they do).

If the little versions of ourselves with uncompromised-yet creativity and innate sense of playfulness are often collectors - there must be a deep reason and a need for it. Perhaps practice for our future survival, as hunters-gatherers. Collecting berries, medicine herbs, sticks, rocks and other resources for crafting aids for our survival such as weapons and tools. Additionally, the continuous seeking out and sorting makes sense of the world around us and cultivates the cognition, teaching skills such as counting, categorizing, laying out the collection and taking stock are skills we now take for granted only because most of us are so well practiced in them, unintentionally. Seeing what's missing in it or what we have too much of and can give away, share, or save for later... 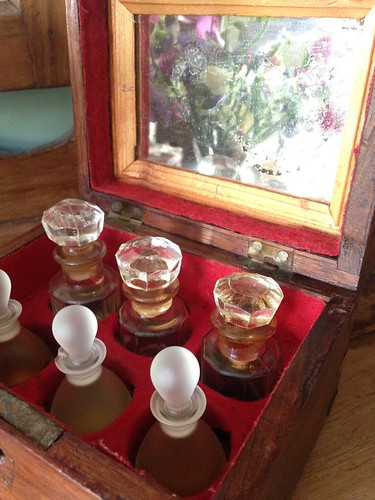 The existence of the collection itself creates a sense of identity, connection to the world around us, point of reference, something to notice, or just pass the time (could that be our mission on this planet, anyway?). Many of my customers are perfume collectors, and I understand their desires because I am one of them - with a collection of 70 or so full sized bottles of vintage, classics and modern concoctions, a dozens of miniatures and decants, and an countless samples that in order to be able to actually make sense of I created two storing systems for - index cards; and a curated collection of samples sorted by categories - such as fragrance families (Chypre, Floriental, etc.) or  a dominant note (patchouli, vetiver, musk, etc.).

collection
1:  the act or process of collecting
2 a :  something collected; especially :  an accumulation of objects gathered for study, comparison, or exhibition or as a hobby
b :  group, aggregate
c :  a set of apparel designed for sale usually in a particular season

Add to that my own perfume line, which is grouped into 5 different "collections" - i.e. "Liquid Poetry",  "Agent Moriel" and "Language of Flowers" and the notion of creating collections as means for organizing, categorizing, branding or communicating a concept is one of the main benefits of creating collections. These are similar to the third meaning of "collection" in the above definition, but also signify a thread that connects these creations to one another - a more abstract concept, if you will.

Which brings me to the next inquisitive part regarding collections: is there meaning for each part of the collection on and of itself; of do they only have an aggregate meaning, when positioned together as a group? Would a rock with a hole in the middle be more special on its own; or does it become more meaningful if one starts collecting other rocks with hole in the middle, or thread them on a shoelace to keep them together? Would a fresh bud or a fiddlehead or a new leaf have a significance on their own - or is it only together that they become the embodiment of spring? I will not pretend to have the answers, but this is one of the things that the process of collecting initiates. 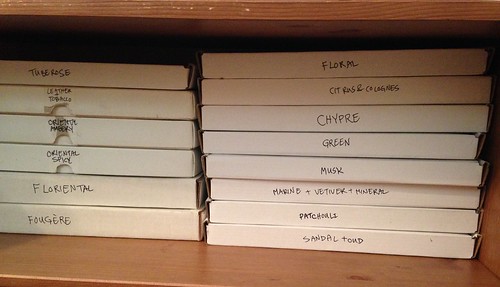 Being a perfumer also means that my odoriferous collection contains not only an astounding amount of vintage classics and modern olfactive works of art, but also raw materials in various amounts and sizes of bottles, vats and sample vials (which I also organize in an indexed card system). Perfumers are ever on a mission to find new, exotic raw materials. They're the forerunners of the concept of travel as luxury. I, for one, prefer to be an armchair traveller - or more so - a bench traveller, seated by my perfumer's organ, and take a trip down memory lane, which may take me thousands if not millions of years back to the beginning of time when our ancestors first lit fire and experienced the phenomenon of pyrolysis; or ancient rituals utilizing the most ancient incense (frankincense and myrrh).
Over the years, I learned that both the perfumes and raw materials are like vats of frozen memories. Like the magical glass orbs in the Hall of Prophecy, if they are uncorked, or unintentionally spilled - the sensations, emotions and deep meaning of a situation or an entire period in your life can be re-experience. All one needs to do is open a vial and be reminded of random life events that were marked with a fragrance: The scent of the deodorant you wore in highschool, the smell of your first boyfriend's aftershave, grandma's home (and her dresser in particular), and so on and so forth. And if the fragrant collection is actually used - the feelings, sensations, memories and meanings will deepend and create new layers as we live with a perfume in a new situation; or create a different connection to a raw material, noticing a new nuance that our trained nose can now detect (after smelling something else). 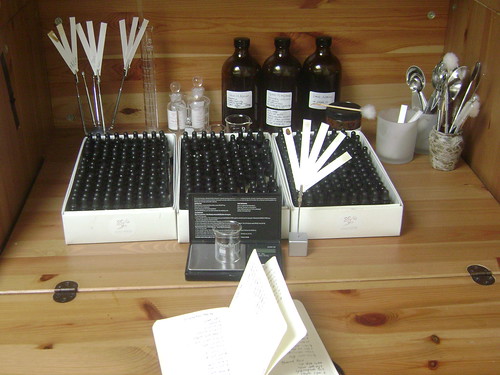 This is what I've been busying over in the past couple of weeks: I've been going over my collection of raw materials, and making organized notes of all the mental notes, sensations and memories that I've had in response to them over the years. As I smell champaca CO2, for example, I don't only recall the first time I've smelled this raw material; but also the delicious, ambery-incense-like dryout on the scent strip, reminiscent of the Nag Champa incense I'd burn in my 20s when I wanted to make my little apartment feel relaxed and luxurious (unfortunately, now that I discovered better quality incense sticks, I eschew these cheap joss sticks altogether and need to order most of my incense online or wait for a friend to go to Japan for a visit and bring me more). And, wait! I suddenly detect a surprising note of grape-scented markers (an aspect in champaca that is more obvious to me now that I've smelled methyl methyl anthranilate as an isolated molecule).

And then, just like creativity, a collection has its own cycles within its existence: The feverish spark that ignites a new obsession (or re-activates an old one), followed by a disturbed mental state where one feels continuously discontent: searching, researching, seeking out new specimens to populate the collection, feeling restlessness until the desired object is found. Once it was acquired, though, there will be a sad sense of emptiness, of feeling lost now that the need to find something is no longer there. Just like the artist, the collector will ask herself: "What is my purpose now?". A period of dormancy will ensue, in which either there will be no interest in the collection whatsoever, or, a not any less obsessive arranging, rearranging, in a process not unlike soul-searching, purging of unnecessary elements, editing, so to speak, and then perhaps also regretting that we've let go of something beautiful; yet it's all part of the process in which we figure out what is now missing from it. And then the cycle will repeat itself.
Back to the top