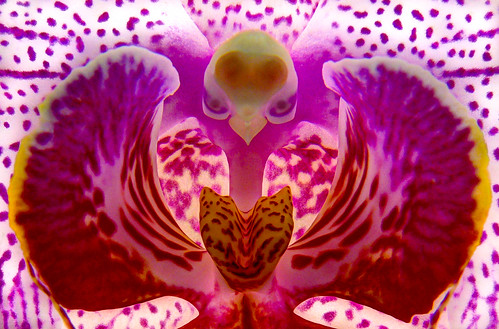 When Alien initially came out  in 2005, I was disappointed. It seemed so tame in comparison to its predecessor Angel, and even when placed against the more subdued flankers of that one (Angel Innocent), it stroke me as a cacophony of nondescript synthetic florals.

Ten years have gone by, maybe my sample has improved with time, or maybe I'm just more able to appreciate some of the thinking behind this strange perfume. Now it smells like an upscale version of the sweet florals that celebrities are overeager to endorse, but also - it smells like it has a bit of the Angel DNA in it, and not in the form of cotton candy, patchouli or berries - but rather with the spacious, watery-ozonic Helional that matches to a T the hideous, dangerous-looking bottle that looks like it comes from Lady Gaga's stash of torture gadgets.

The opening has a peculiar camphor off-note, that makes it smell almost genderless or even a tad masculine. It's not quite green but there is also a hint of menthol as well. These two consecutively confusing impressions disappear within a few seconds, and there is a hit of jasmine sambac's gardenia-like quality, a hint of its grassy, oily greeness, the type you'd get in a disastrous Jasmine auriculatum absolute - but thankfully, that also is very short lived. Next up is a vaguely fruity, lactonic, sweet-floral phase. There isn't a particular fruit involved, but just an overall juicy luscious aroma of methyl anthranilate and perhaps undecalactone and peach lactone, and then it bounces off to camphor/menthol territory again. With all of this movement upfront, at least I it's not boring for the first few minutes.

While I can't say I'm enamoured with Alien, I can see something in it beyond the generic and notice hints of odd, off-beat nuances. It's not as striking as you'd expect by the washed-out face of the Tilda Swinton-esque model, who seems startled by the headlight of a passing spaceship. If you look past the yawn-inducing aspects of it that bring to mind Chanel's Allure, you'll notice a tiny bit of Lolita Lempicka in there, something yummy yet not quite chocolate-y, not quite licorices-like, but a subdued spicy-vanilla of sorts that makes it quite enjoyable overall, actually. Another surprise for me was, though, that a few hours in, it morphs into a fragrance very similar to Tocade - a powdery, vanillin ambreine floral, though unlike Tocade, there is nothing rosy about it, even though the jasmine is mostly gone by then. Just a similar balance between powdery, clean yet sweet amber and musk.