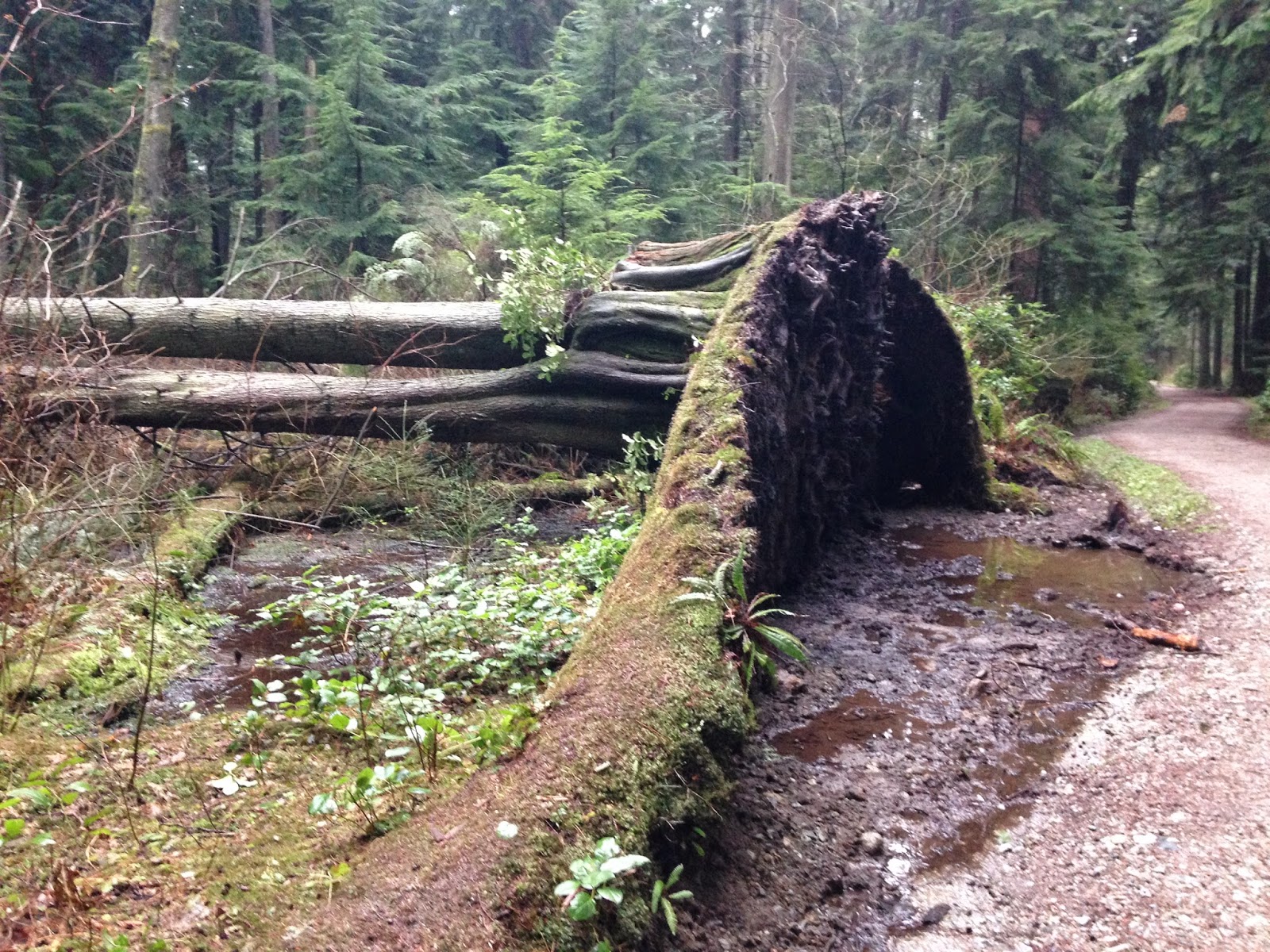 Earlier this winter, as I went deeper into the forest trails, my eyes met with a devastating sight. After several days of rain and wind storms, two beautiful, tall and rather ancient Douglas fir trees (well over 200 years in my estimate, although this is probably young in fir years) were uprooted and simply flipped over. It's a sad sight, and one that literally pierced my heart and brought tears to my eyes. The air around the trees was filled with their tragedy, and I heard their screams and shrieks of pain from being uprooted and losing their life-giving connection to the earth.

Here is the strange thing about an ancient fallen tree: it dies a slow painful death. Perhaps even move the course of several weeks when in such moist conditions that as the rainforest. Maybe it's not that slow in tree years, but it sure seemed prolonged to me, as I was walking by the same trail several weeks in a row, and still saw signs of life in these two fierce yet fallen giants.

First the roots alone feel the change: they are accustomed to life of darkness and the cold yet nutritious moisture of the earth. All of a sudden they are exposed to the foreign presence of air and light. The tree's equivalent of nervous system must have felt the pain of the roots as they leave the ground and disconnect from the smaller rootlets, and the shock along the tree's spine as it hit the ground. Over the next few days, if not weeks, the tree's storage of moisture will get used up, perhaps slower than before. The roots will attempt to cling to any moisture they reach from the damp rainforest air, but circumstances are largely not in their favour. 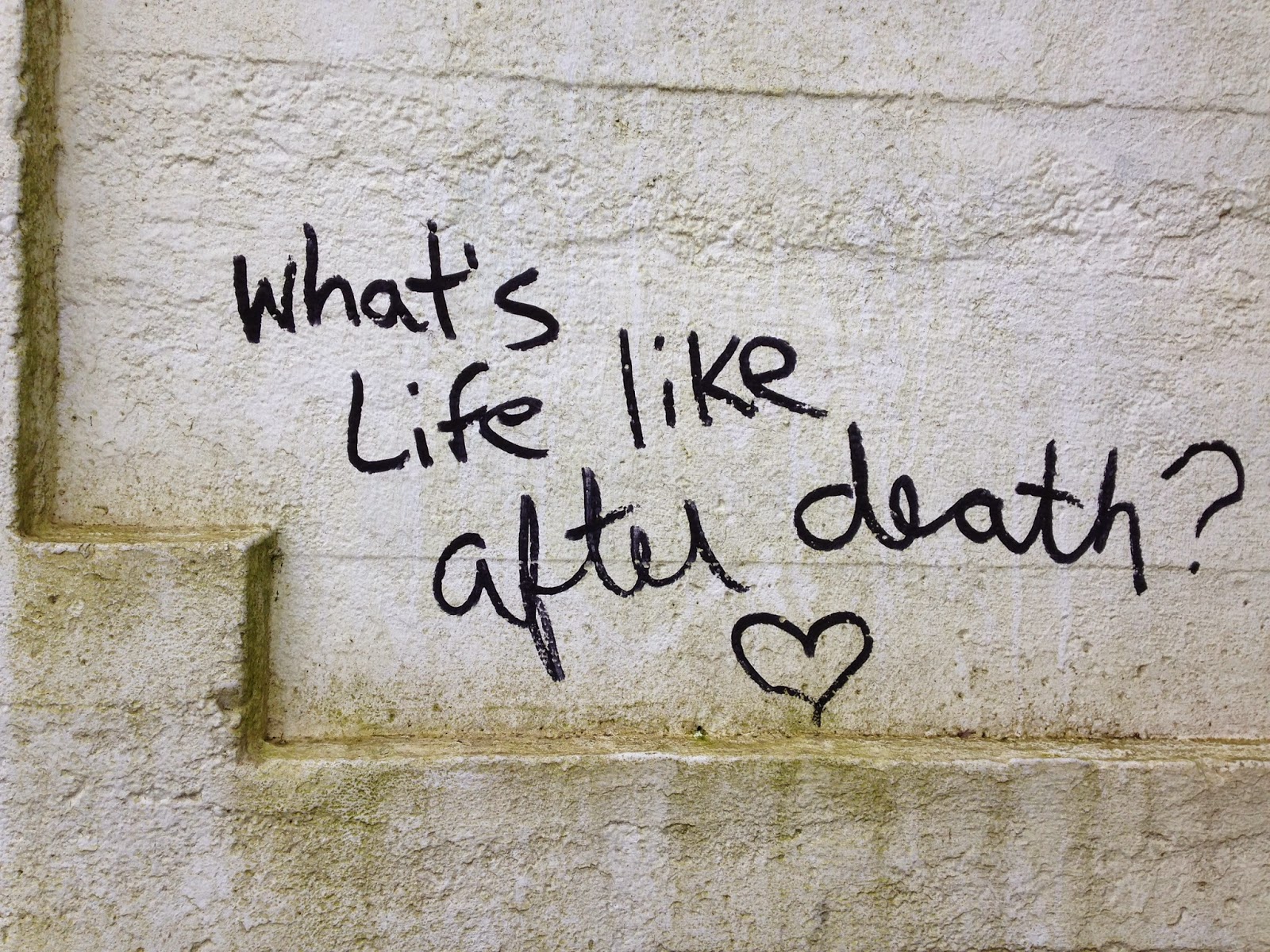 I get closer to the tree. Touch its rain-soaked bark. Feel the tremendous pain its in. The tree that once had stood so proud and high above all creatures is now lying horizontally. I can feel its pulse, weak, trembling but still there. I pat the damp moss on the base of its bark and on the formerly superficial portion of its root system. What about all the lesser life forms on the tree? Did they notice the change? Are they worried about their future? Perhaps not. The tree's body will nourish these fungi, fern, lichens and moss strands for countless years to come. And water is present in abundance for these plants from prehistoric kingdoms.
And this is how life meets death. Or perhaps the other way around - death is the one that greets life and reaches out to it. In the rainforest the coexistence of these two opposites is the most obvious, natural. And if it weren't for the drama and tragedy of the storm, those two states of being just weave in and out of each other seamlessly. The trees took about four weeks to use up their water, shut down their entire systems of livelihood, and say their farewells to the world as they lay horizontally and stare at the barren skies through the space their missing canopy left behind. After checking their plus this weekend, I am pretty sure that they are now among the dead. Not only are the needles no longer green, many have already began falling to the ground. And there is something you cannot see, but only feel, that tells me they are now just inanimate objects, vegetal corpses providing nutrients to the new generation of trees, bushes, housing birds and squirrels, bugs and microorganisms that will take many years to penetrate the strong essential oils in the heartwood to completely break it down. It will become, eventually, part of the soil and part of the root system of those new plants and create an intricate piece of the rainforest ever changing landscape. 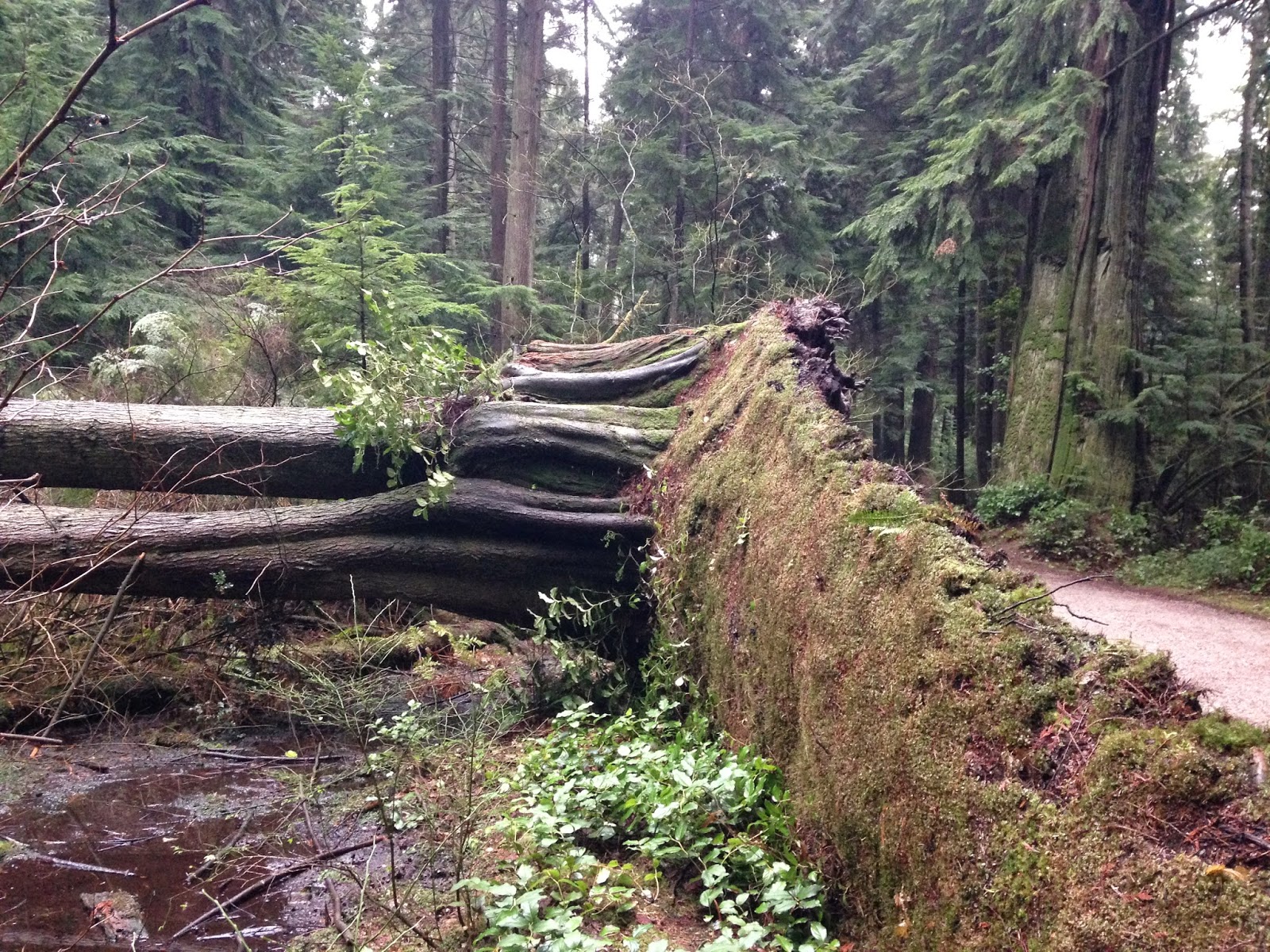 We humans are strange creatures. Life should be life; and death should be plain and simple, cut and dry. But how many of us live in a state of a dream (or a nightmare) and constantly attempt to escape the present moment? How much of our lives we wish we were somewhere else than where we are, and be someone else - or be with somebody else than the people and creatures that are present in our lives? I am beginning to think that constant discontent with the present moment is the root of all illnesses. That and the lack of gratitude to what IS in our lives, what is present, what we "have" so to speak (at the end of the day, I don't believe ownership truly amounts to much). That obsession of what would happen next - after we finish work, or after we finish resting; after we finish living, or once we stop dying. This mindset is so futile, counter-productive and ultimately shows very little gratitude. We should be thankful every moment that we are alive, and literally, live up to what that entails.
Back to the top