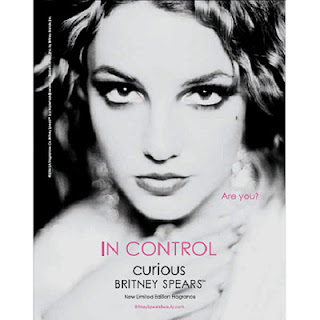 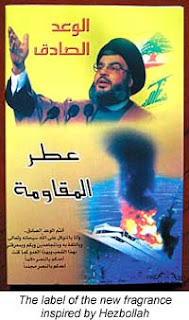 For some reason, all my romantic Valentine’s Day posts and perfume reviews are getting pushed aside because of more “political” agendas related to perfume.

To take off thr edge of the heavy topic ahead of us, let’s start with a little rhetorical question. What do the two images above have in common?

Is it control? Is it curiosity? Perfume?
Perhaps all of the above...

This new perfume was launched in Lebanon as an homage to the success of Hisballah’s assault on Israel in Summer 2006.
I am all for using perfumes for self-expression, and think this is a very interesting reaction to what happened last summer. A very interesting cultural phenomenon. In a way, one cannot help it but be very curious about how it smells.

The natural reaction for an Israeli and a Westerner would be that of shock and disgust. However, I have to report that I am feeling mostly curious about it than anything else. The selection of notes is of utmost interest, as it is said to contain Tea Rose (apparently, Nasrallah’s favourite) and in fact has connection to Muslim culture As a side note, Muslim culture contributed to perfumery a lot more than the French would like to admit. Perfumery truly originated in Alchemy. The word “Alchemy” is from the Arabic word “Al-Chimia”, and the Arabs were some of the most esteemed alchemists. Roses have been always considered a masculine scent in the Arab world, and were used exclusively by Arab rulers. They used to retain the freshness of roses by burying them in clay jars under the earth to keep them cool, and when the roses were not in season anymore, dig them out and sprinkle water on them to bring the scent back to life. It is said that the prophet Mohammed had a body odor of roses and musk. Such was his holiness and purity of heart that he did not stink lime most of us do.

One cannot help it but notice the resemblance of Attar de Resistance to the widely popular “Celebrity Perfumes” of the US. While in the US actors and singers release perfumes to represent their charming personalities and make big bucks, in Lebanon, fans of the political-religious movement make a perfume as a gesture of admiration for the leader and sell it for just $1. The perfume is packaged in a sample vial in a little propaganda folder.

I am not going to turn this into a political discussion (so please refrain from political comments unless you want to express opinions or suggestions about achieving PEACE in he region). I grew up in the region that got thousands of Hisballah rockets this summer (2006), and a kid from my brothers’ school – the high-school I myself have graduated from - was kidnapped as well during the violet events of summer 2006. Yet, this is not going to stop me from wanting peace and working towards peace in whatever way I can. In fact, I spent the better part of last year working practically for free on a publicity campaign for a peace summer camp, that had 10 Israeli, 10 Palestinian and 10 Canadian youth staying for 3 weeks in a film school in Galiano Island and making films about their experience of the conflict and meeting each other I will do everything I can to promote peace. Making a perfume to fundraise for peace education programs in Israel and Palestine is not a bad idea...
Back to the top