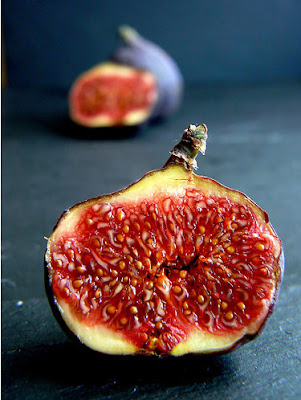 Aphrodisiacs are named after Aphrodite, the Greek goddess of love and passion, and are by definition substances that cause sexual arousal and desire. Many herbs, plants and fruits that are considered aphrodisiacs in the Western traditions, are also alluded to Venus or Aphrodite (both the goddess and the planet), i.e.: fig, myrtle, rose, violet, etc.

Certain foods and beverages that enhance our overall well being (i.e.: supplementing certain vitamins, proteins and minerals that are essential for the reproductive system). Drugs and supplements can also intervene with the hormonal cycles that promote sexual desire. And last but not least – scents can trigger the feelings and mood of desire and attraction.

Foods, plants, herbs and animal-parts that were considered aphrodisiacs were often chosen because of their shape – i.e.: the phallic shape of bananas, cucumbers and rhinoceros horns; the vulva shape of figs and oysters. But there is sometimes also a biochemical reason behind it, when the food in question has certain minerals or vitamins that are particularly beneficial for the reproductive system.

Chocolate, for instance, is a valuable aphrodisiac as it activates endorphins in the nervous system, creating a good feeling that is similar to that we feel when we fall in love. Chocolates paired with chili peppers a stimulating love potion and also tastes magnificently good! Try to make your own hot-chocolate, spiked with black chili peppers, and prove me wrong. This is one of my favourite drinks ever (a recipe will follow).

When we look at the aromatics that are considered aphrodisiacs in aromatherapy practice, and have been used for centuries by ancient traditions as well as in perfumery – they seem to be divided into four major categories:

Stimulants
Here is where you will find most of the spice oils. Creating the sensation of heat, the increase blood pressure and circulation – which is not unlike sexual arousal. Spice oils have a definite character of their own, and spice up any perfume composition, quite literally. These include essential oils, CO2 extractions, and absolutes extracted form the familiar spices in our kitchen, such as (when you click on the links, it will lead you to the building block database on my website, including all the perfumes from my collection that significantly features that note):Some herbs also have a lively, spicy, pungent aroma with a similar effect, and these oils can be used similarly to spice-up and add a vibrant passion to a scent. These herbs are also known as anti-depressants and stimulants, which might explain a lot about their effect as aphrodisiacs:
Sedative, Erogenous Scents
While the previous category was mostly of pungent, lively spices and herbs – oftentimes eroticism and sexual arousal needs a relaxing environment for the mind and the body for the passionate feeling to be awakened. Deep, sensual aromas such as resins, balsams and woods provide that type of stimulation. Also, animal secretion (often used by the animal itself to attract the other sex), have a similar effect. Some of these notes have a certain affiliation with the natural sexual scent of men or women.
Floral and Narcotic Notes
Most floral notes are rich with indole, a chemical that is found in human feces. It’s interesting how this note has both the power to repel and compel. An overdose of indole is definitely off-putting; but it is the note that makes jasmine smell so attractive and sensual. Synthetic jasmine compounds that lack this element were found to be completely useless…
And lastly, there are notes that either stimulates or imitate a sexual hormone and are often used in aromatherapy to balance these hormones. The most famous of these is Clary Sage, which acts as an estrogen balancer for women. But Aniseed has a similar effect and has a mysterious aroma that can be very valuable in scented love potion. Licorice, which has a similar scent, is said to stimulate both estrogen and testosterone.

Of course, there are also personal differences – you may be more prone to react to certain aphrodisiacs than others. A scent that a former lover had worn may increase (or decrease, it all depends) desire when smelled again out of context…

The following is a list of aromatic aphrodisiacs and perfumes that use a respectable amount of them:


*Image of figs courtesy of lemon_farmer
Back to the top