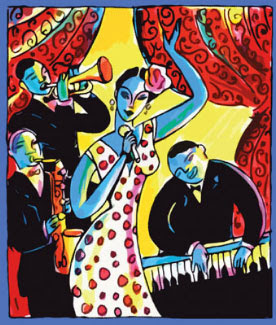 My perfume l’Ecume des Jours was inspired by Boris Vian’s magical novel by the same name. It was inspired by the perfect beauty of the Jazz of New Orleans, and in particular the music by Duke Ellington. This is a book that is signified by a perfect symmetric structure and the collapsing of a universe because of its own fantastic and surreal rules. It’s beauty is unbelievable. And so when I created a perfume in its namesake, I tried to make it perfect too, if this is even possible… I took the most unusual essences, such as boronia, pink lotus, seaweed, moss and cassis, and worked them together to create a watery, transparent, floral-green perfume. Something that is almost out of this world… I was very pleased to notice that recently it has finally started getting the recognition I was hoping it will receive, which translates into sales of course. And while this made me happy and proud, another thing made me sad…

Last week I watched in awe Spike Lee’s documentary “When The Levees Broke”, about the drowning of the city and the people of New Orleans. The people of this unusual city, which has been a beacon for freedom in the USA, an example for multiculturalism and a corner stone in the USA’s culture of jazz music and art – in fact a corner stone of the entire Western Civilization – have been let down by its own government. The people of this city have received very little help from the USA government ever since Katrina struck. So I thought to myself: “If the president of the United States doesn’t care for New Orleans citizens, let the Citizens of World care for them!”.

Let’s not let New Orleans collapse in the same way that the world in l’Ecume des Jours collapses into non-existence. Let’s not let a perfect city drown again in misery and death, poverty and stormy waters. This is too cruel of an end to a city that is truly the heart of America as we know it. It drowned in the water rising from the hurricane and unstoppable by incompetent levees. Let’s not drown it a second time by not helping the people of New Orleans to come back and rebuild it. Let’s help them re-build New Orleans, ensure its safety from rising water by restoring the wetlands surrounding it and building safe and steady levees this time. There is something we can do about it!

One of the powerful things a small business owner can do is help the community and help make a social change. Since the very day of conception of my little perfumery, I always knew I would do all I can to help causes that I think are important and that are close to my heart. I would like to invite you all, responsible business owners, bloggers, perfume lovers – responsible, caring people and citizens of this world - to join me in supporting charities in New Orleans that truly help the people of New Orleans and re-build the city.

I will be donating $10 from each bottle of l’Ecume des Jours that I sell to a New Orleans woman that is struggling to support her aging mother and two children. I have only raised $60 so far this way, but hopefully l’Ecume des Jours will sell more after this post, and hopefully my perfumery will flourish and grow to enable me to do even more for New Orleans. 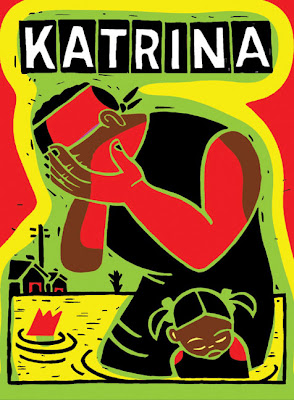 I invite you to do the same and support an individual from the city, or donate to one of the few charities that I have confirmed are in fact helping the people of New Orleans and are most likely to actually make a difference in the future of this remarkable city.

Here are their links, as well as links to the film’s homepage:
To help New Orleans people with basic needs such as food and shelter you can donate to this charity:
Catholic Charities New Orleans - Hurrican Relief Services and Projects

To help restore Louisiana’s wetlands, essential to the future survival of the city, you can support this organization:
America's Wetland

Click here to read more about the film “When The Levees Broke”, where you can also find an interview with director and filmmaker Spike Lee, and also find out about more organizations rebuilding in New Orleans.

The illustrations and art work for these New Orleans posts are all courtesy of Mark Andersen, a New Orleans artist and a Katrina evacuee now living in Atlanta, GA. One more thing you can do to support New Orleans is purchase his art book via Emigre.com, which will donate 50% of the sale to a program in New Orleans to aid affected musicians.

Artwork copyright by Mark Andresen, 2006. Some images are from "New Orleans As It Was: Sketchbook Drawings by Mark Andresen from 1988 to Katrina", designed by Rudy Vanderlans and printed by Gingko Press. Avialable on Amazon.com and Emigre.com. If you buy it from Amazon.com you will be supporting the artist, himself a Katrian evacuee.
Back to the top