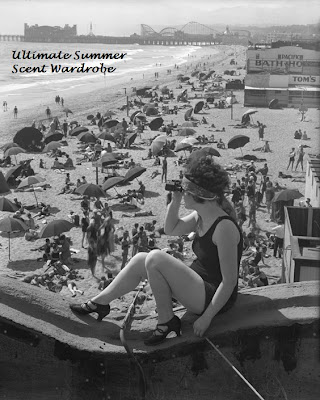 This midsummer, I’ve invited a few others of my favourite bloggers to list their favourite summer scents. What started as a simple “top 10” list (we bloggers all love those for some reason, as redundant as they may seem to some of our readers – or not) – turned into a summer guide to what to wear, when and why for nearly every possible summer scenario we could think about. I want to thank all the participating bloggers for being such great pals and joining me on this last-minute blogging project; and for coming up with so many cool ideas for different summer scenarios that requires a matching scent. Special thanks to Gaia for finding this quirky summer photo and for Elena for adding the tagline on the image (I still need to figure out how to do stuff like that on Photoshop – I only know very few tricks there!).

So here we go, scents for (nearly) every possible summer occasion, at least the ones I could think of with a lot of help from my perfume blogger friends. And I would like to hear what you think is missing from the list or what you'd chose for your summer wardrobe. I will have a draw between the readers to win 2 miniature bottles of Jo Malone's Grapefruit Cologne and Lavender Cologne.

A Day at the Theme Park or Fair
I though this would be my toughest scenario to find a match for. But it was the easiest: Sugar by Fresh = cotton candy and lemonade. Just add some butterflies as you scream your way on the rollercoaster and you’re good to go.

Summer Night in the Big City
I’ve only been in three big cities during the summer: London, Montreal and New York. The first I was too young to wear any perfume, plus it rained so much it did not feel like summer). Montreal is mostly remembered for the jazz. And the latter was your expected humid, suffocating polluted summer days and one of my main purposes in the trip was perfume shopping. One evening I ended up with my newly acquired Chinatown. A grave mistake as this is better in cooler weather. But from than on I will always remember Chinatown as my New York City perfume (I bet that would make Bond No. 9 happy). If I were to choose my own way now, I would go with something more personal and close to the skin, something to call my own and identify myself in the big crowds. And in a more quite, less obtrusive way than how Chinatown does it. For the sake of picking one scent I chose Magazine Street by Strange Invisible Perfumes. It starts with a lovely white magnolia note and a sharp contrast of vetiver and develops into a musky skin scent, woody, a tad smoky, and very distinct.

International Travel / Jet-Setting
This is a tough one. When I travel I don’t like wearing much, and what I usually do “wear” is those little towelettes soaked in some typical eau de cologne. For long flights that’s usually as much as I can tolerate. Or I would sometimes stop at Hermes and put some Eau d’Orange Verte. Such scents help me feel refreshed and a little bit cleaner than I probably am being stuck in a cabin for long hours (most of my flights are to Israel, so we’re looking at least at 14 hours inside the plane). I like airplanes so little that I don’t really want to associate anything with my actual flight. But last time on my trip back from France, on the London-Vancouver flight, I stopped at Chanel before I got on the plane and doused myself with Sycomore. It turned out to be an excellent choice. It’s a scent I already love (so no fear of associating it with airplanes) and there must have been something really grounding and comforting in the vetiver with hints of mastic resin.

Going Sailing
Deseo, with its equal measure of trashy coconut and synthetic fruit and clean-cut modernized so-called “chypre” - it reads more like a fougere to me. It has a hint of that watery-musky base that so many aquatic masculine fougeres have (Cool Water and the like) but at the same time feels warm and confident. Deseo is like a beach scent with balls, and would be my choice for a little wild ride on a motorboat in English Bay.
P.s. I’m such a show-off, you should know that it would be my brother actually riding the boat, and I will be begging him to tone down the speed ;-)

Drive-In Theatre
Not that I’ve ever been to one (yet) so I can only imagine this based on what I’ve seen in all those 50’s movies. I can’t imagine myself wanting to wear a 50’s style scent (read: aldehydic floral) in the summer. So instead I am going for a scent that my brother described as smelling like the interior of a taxicab, and by that I mean pretty much the entire “Vanille” collection from Comptoir Sud Pacifique. Their Coco-Vanille is particularly realistic, as it smells exactly like those little coconut-scented paper trees that are so commonly popular with taxi drivers in Israel. If you want something more wearable, go for Vanille-Abricot or Vanille Pineapple.

Summer Siesta
There’s nothing sweeter than taking a little nap to make that hot afternoon pass faster, and skip straight into sunset. And even better – a nap taken on a hammock in the garden. To me, Sweet Lime and Cedar smells like this siesta: a combination of the jasmines climbing on the pole where the hammock is tied up to, remains of a watermelon eaten on the grass, and of course the fibers of the hammock releasing their scent even more in reaction to the salt from one’s sweaty back...

The Farmer's Market
Philosykos, because green figs is the only thing that will never show up in a Farmer’s Market in Vancouver and I miss them so much!

Summer Garden Scent
Of all perfumes, the one I chose to wear when tending to my summer garden (all pots and planters, mind you – I’m still on the waitlist for the community gardens!) is Chrysalis by Soivhole’. It has a dominant note of marigold (FYI: any amount of marigold is dominant and this one is beautifully done without being too much), and marigold to me read summer! Other notes include Absinthe, cognac, fig and organic butter tincture, jasmine, orange blossom and carnation.

Beach scent
Yes, this subject is very original, I know, but definitely necessary whenever summer is in question!

My all-time favourite remains Azuree de Soleil Body Oil (it’s now called Bronze Goddess but I’m still finishing up my second bottle of the original name). Its mix of vetiver, incense, gardenia and honey resembles a sun warmed skin and it’s not as clichéd as so many other beachy scents. I love it on its own but it also layers beautifully with other scents (meaning: you can wear another scent on your pulse points and they really complement each other). My favourite pairings are Songes and Chinatown.

Rainy Beach Day Scent
But for the sake of changing things around a bit, I have two more scents for the occasion - which is all the more appropriate because it’s the single summer activity I take part of no matter what. You’ll rarely NOT find me on the beach during the summer! I even go jogging on the beach when it rains (that goes for every season though…).

And on a day when it rains and all you can do on the beach is build sand castles or jog along the seawall, there’s nothing better than Turtle Vetiver, which smells like playing in wet sand.

Poolside Scent
Terra Cotta Eau de Sous le Vent is again not really a perfume but technically a tan-enhancing body spray. It also smells wonderfully of gardenia and sun-warmed skin, perhaps with hints of coconut and suntan lotion. I first worn it on a balmy May night at Cannes beach by the Cinema de la Plage, and hope this is the memory that’s going to stick with me. There is more gardenia than sun warmed skin or sand, which is why I’ve picked it as a poolside scent rather than for the beach. It lacks that “dirty” side of sand and salt and oiled skin so I think it will be more appropriate for the sterile fun environment of a pool party.

Bar-B-Q
If there is one thing I could do without during the summertime is Bar BQ. Being a vegetarian and a perfumer there is not much for me in it: I can’t eat the food. Even the vegetables and fake meats will most likely be covered with meat juices, and I could never see the point of scorching vegetables anyway. Must be something that works wonderfully with meat… And besides, the smoke and the smell are horrific to me. I know I am a minority but whenever my neighbours downstairs Bar BQ (which is pretty much every other day of the week and even more so during the summer) I just want to run away…
So what to wear in that situation? Tough question, because all I try to do than is avoid the smell… Perhaps Giacobetti’s ingenious Tea for Two (l’Artisan Parfumeur), where the smokiness can be mistaken for a cup of fragrant lapsang suchong masked with brown sugar and steamed milk.

The Chinese Night Market
Every year in the summer, for three nights people from all across the Lower Mainland defy the notion of guaranteed bad parking conditions and swarm the Chinese Night Market in search for bargains and Asian street food that can be found nearly nowhere else in town. For such a night I suggest wearing a sheer playful floral, and my choice is Pure Poison. There’s nothing serious about it and the combination of orange blossom and heady tuberose over incense and musk is universally sexy and goes well with sweet crepes, fruity bubble teas and deep fried ice cream. If you are planning on having a green papaya salad, reach for Sweet Lime & Cedar instead.

Best Fruit Salad Scent
Fruit salad scents have been all the rage for over a decade now starting somewhere in the mid 90’s innocently enough with aquatic florals such as Acqua di Gio, Light Blue and so on. Unfortunately, once the aquatic floral craze died out with stayed with fruit salads, compotes and syrups till this very day, which took over most designer and celebrity fragrance releases for women. Only now we finally get to see the end of it (I hope) with some more interesting takes on the subject. Un Jardin Apres la Mousson is a prime example; where juicy cantaloupe is juxtaposed with vetiver, pepper, ginger and coriander, resulting in a fragrance that is wearable, transparent and intriguing despite its simplistic composition.

Summer Meditation
With so many things happening in the summer, and the unlikelihood of saying “no” to all these attractive choices, one could end up exhausted and in much need for introspective down time or meditation. Than I like to burn Buddhist sandalwood incense or fine Japanese incense sticks under my Star Jasmine bush and just sit back and relax on my porch… For such times, there is no better incense summer scent than Kyoto, with its hinoki, musk and mastic notes it is deceivingly light but really quite haunting.

Read on what other excellent perfume blogs have to say about scents for every occasion in summer:

Perfume Shrine
Back to the top