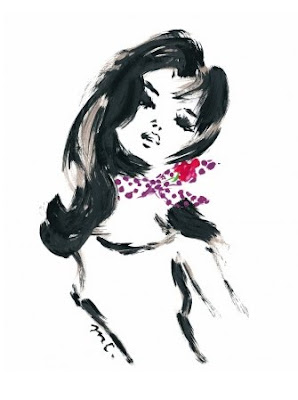 Is it possible for a perfume to be simultaneously floral, fresh, warm, spicy and woody? Apparently yes. Si Lolita succeeds in being all of the above without any clashing of the elements. It is all at once pretty, happy, girly fragrance and a surprisingly spicy. Beginning with a dry peppery freshness of pink peppercorns, cedar and the lemon-and-pepper balsamic pungency of elemi resin. Si Lolita glows softly on the skin, revealing its almondy tonka and heliotrope foundation with hints of patchouli that smells musky-animalic in this context rather than earthy (that’s the magic of perfume: blending tonka and patchouli together creates something new altogether). At its core lays a sweet pea accord, a flower that hasn’t been exactly popular since, perhaps, Caron’s Pois de Senteur (1927). After searching high and low for a sweet pea scent on Basenotes, I found only four that either have mention of this in their name, or as a note.

If you ever grown sweet peas in your garden, you know how cheerful their smell is. It is sweet as the name suggests, and has spicy and green elements, make is why it also feels very balanced – not cloying or heady or indolic like lilies, for example. Both Arctander and Poucher describe sweet pea flowers to have a scent of hyacinth and orange blossom with a little bit of rose. Unfortunately, although the flowers yield themselves to extraction with solvent, an absolute is not produced commercially at the moment, so whatever is in Si Lolita must be a sweet pea floral base (created by the perfumer to reproduce the impression of the flower).

But I digress. (update: I decided to move the portion about composing sweet pea accord into another post). I got a sample from Holt Renfrew on Saturday afternoon, and by Sunday night my grocery list already included a bottle of the juice (as I’m writing this, I am still waiting for my daughter to return from school so I can do my “groceries”). This is not to say that Si Lolita smells like a grocery item, but it has captured my nose immediately, that I am feeling deprived since yesterday night – so you see, it is a necessity!

Si Lolita is mischievous, pretty, chic and easy and fun to wear. While it has enough warmth in it to make a fall day feel cozy, it is a rather light scent, even at the EDP concentration (which explains why I run out of the sample in less than two days – I had to reapply a lot). It’s not nearly as potent as its big sisters Lolita Lempicka and L, but it would be a bit much if the entire line was heavy orientals, wouldn’t it?

The bottle and packaging is whimsical in a non-chalant, effortless Parisian style. It’s romantic without being nostalgic, the design feels as effortless as a non-committal sketch in water colour, yet it works. It’s easy on the eyes and easy to handle and apply (something I can’t say about either L or Lolita Lempicka’s bottles). The flow of design is thankfully not reserved for the visual alone but also the fragrance. And the most surprising part – it’s interesting and even original in its choice of notes and comosition.
It’s refreshing to see a scent that is pretty and perhaps even “cute” by some standards, easy to wear without being pretentious, and even has a spark of originality in it. It really shimmers as a result. And I think it is even going to sell well with that lucky four leaf clover. 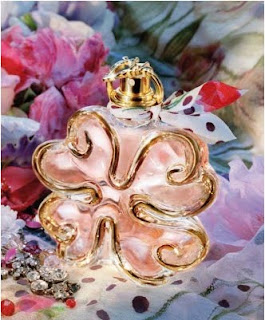 P.s. I really recommend you read Octavian Coifan's commentary on this unusual perfume.
Back to the top