Home / SmellyBlog / What Is Natural?!

There is an ongoing and lively (at times even heated) debate in the fragrance industry as well as among consumers about what is considered “natural” and what is considered “synthetic”. The terminology that is used by scientists, manufacturers and within the perfumery and flavouring trade is significantly different than the consumers' perception of terms such as "organic", "synthetic", "natural"... Throw in a term such as "organic synthesis" and the average person would get completely confused - most consumers think of "organic" as something that was grown without pesticides, non-GMO, etc. Organic chemistry, on the other hand, is a sub-discipline of chemistry that studies carbon-based and hydrocarbon based compounds. Many of which are formed in a process called synthesis - which when utilized by people will produce what we'd call "synthetics". But synthesizing is a process that occurs in nature - it is part of the metabolism of both plants and animals, and this is how all the useful medicinal compounds and essential oils are produced in plants.

Despite my clear and stated preference for using naturals in the products I create and sell (as well as products I purchase from other companies to use personally), I highly encourage you, my dear SmellyBlog readers (as I encourage all my customers and especially my perfumery students) to examine the true meaning of the terms natural and synthetic. Rather than portray a black and white picture, where materials can clearly be classified as either “natural” or “synthetic”, I would like to suggest an approach that helps to understand how materials are obtained, extracted and processed, and place them on a continuum that illustrates their relationship to the original raw materials based on two categories:
1) How much human intervention was required to obtain the material/building block?
2) What is the olfactory and chemical relationship between the raw, crude material and the end result?
- Based on these two factors alone, one can better understand and appreciate the qualities of different materials, This way, manufacturers and consumers are better able to make informed and educated decisions about the products they produce or procure.

The rawest state of an aromatic material is the crude state – such as the entire plant, or part of the plant – as in the case of balsams. The most processed is aromachemicals or other chemicals, including alcohol. Even organic grape or grain alcohols are, in fact, synthetic since they are achieved by the process of synthesis. Between those two extremes are varying degrees of human intervention to obtain aromatic building blocks, such as steam distillation, enfleurage, tinctures, macerations, solvent extractions, CO2 extractions (aka molecular distillation) isolates, etc. The table below is extracted from my Foundation of Natural Perfumery Course Handbook (2009 - 2nd Edition). It explains this concept with examples of actual raw materials: how they were obtained, their relationship to the source, etc. As you can see, it's not easy to come up with an exact "spot" for some of the materials in this continuum. Tinctures, for example, are raw plant matter that is immersed in alcohol, which is a material that is obtained by the process of synthesis (albeit from completely natural raw materials such as corn, grapes, etc.). 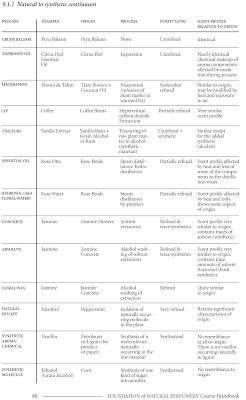 Not all aromachemicals were created equal either. Some are naturally ocurring (i.e.: eugenol, which is present in cloves, menthol in peppermint, geraniol in rose and in geranium, and ambroxan in ambergris and so on). These are "nature identical" molecules that were synthesized from a completely unrelated raw material such as petroleum. Other synthetic molecules are completely man-made and do not occur in nature - they were invented by chemists in the lab either when they were trying to create interesting molecules on purpose, or stumbled upon them by pure chance. Calone, for example, was discovered by the pharmaceutical company Pfizer in 1966. It does not exist in nature, although it is reminiscent of some pheromones created by brown algae, and smells somewhat like watermelon. Galaxolide, a synthetic musk used to death in most of laundry detergents and drier sheets, does not occur in nature (and neither does it break down - it's one of those polycyclic musks that is not biodegradable, which is precisely what makes it so attractive for scenting detergents - the scent endures many washes; unfortunately, the downside of this is that it also stays in the environment's water cycles, not to mention on our skin and in our own bodies for generations to come - the effects of which are still largely unknown).

Some synthetics are produced from waste that would be otherwise just thrown into landfills (such as lignin, a by-product of the paper industry, that is particularly useful for manufacturing vanilla). While some pure, beautiful naturals caused the destruction of entire forests (East Indian sandalwood, for instance). Lignin comes from trees - so would you say that synthetic vanilla is natural - or synthetic? And how about petroleum - isn't fossil fuel part of nature too? There are so many factors - environmental, political, ethical and health issues - that should affect the choice of certain materials over others.

One last interesting and important point for this debate - especially now that an increasing number of natural perfumers are choosing to use natural isolates in their perfumes - the question of what's natural and what's not is becoming more complex. It's easy to see the naturlaness and the relationship between the end result (the isolate) and its original plant when we're talking about ambrettolide isolated from ambrette seeds, galbanol from galbanum (some companies will actually label their isolates with the Latin name of the plant from which the molecule was isolated - which to me indicates that you can really know that it was not synthesized in the process). Isolates in these cases are really just a more refined forms of distillations or extractions - where the chosen components are removed from the plant's oil.

Other so-called isolates or "natural molecules" are manufactured in a different manner altogether. Ionone, for example, is a naturally occurring molecule in violets, osmanthus and other precious florals. It is not financially feasible to extract ionone as an isolate directly from violets. As far as I know, most certified-natural ionone molecules (either alpha or beta) are, in fact, synthesized from natural citral - a compound that is present in abundance in far more affordable natural raw materials such as lemongrass, citronella or litsea cubeba oils. If it's synthesized, would you say then, that it's natural, or synthetic? Or perhaps, it's a natural synthetic?!

Another confusing gray area is biosynthesis when it's used to create certain aromachemicals - at times the fact that natural enzymes were used for synthesis to create a certain molecule allows for labeling them as naturals, and the raw material from which this "natural" was synthesized remains unknown.

I'm going to leave you with these thoughts, and let you decide for yourselves what you want to call natural, if it is at all of any importance to you. From my point of view, both as a manufacturer and a consumer, transparency is the most important aspect as far as ethics go and affects fairness in advertisement and labeling. At the end of the day, everyone decides what they want to put on their skin and flush down their drains. And hopefully with the right information, we'll make smart enough choices to leave a clean, healthy and happy planet behind us for the next generations of humans, plants and animals.