Zangvil perfume will debut exactly a week from today!
This perfume evolved out of a sensory journey that began in 2008. I was feeling under the weather, and a cup of steaming ginger tea simply didn't cut it; so I put together a simple ginger & amber perfume to warm me up from the inside. So it made perfect sense that 3 years later, Zangvil also has a perfume twin to match - a delicate silver needle white tea perfumed with jasmine sambac and further fragranced with aromatic ambrette seed and vanilla bean and crystallized ginger.

The above image is the postcard for the Zangvil perfume, and it's the first time I'm using a human image for illustrating a perfume concept. I usually try to stay away from human figures because I feel it takes away from the personal experience of the perfume itself, and if anything, will make it look like a cheap perfume ad. With Zangvil perfume, however, it seemed there was no other way around (unless I was going with the sexy ginger below!). However, using ingredients or botanical landscape for illustrating just did not seem to be right for Zangvil. This perfume is all about the tactile world - the cozy and warming touch of cashmere wool and its soft caress on the skin. I wanted the image to radiate softness and a subtle sensuality, just as the perfume does. I really wanted to show the contrast of skin against wool or fur. Yet I didn't really want it to be too sexual in the cheesy way that mainstream perfume commercials tend to be (though, admittedly, if you put a bottle image in front of any semi-nude image it will look like a perfume ad).

Also, because Zangvil is a unisex fragrance, I wanted both men and women to relate to it (not necessarily feel attraction to the figure, but rather identify with the sensation of the wool against the soft skin); and I wanted the gender of the model to be somewhat ambiguous, focusing on the rippling of the back muscles and the soft diffusion of light on the surface of the skin and the tiny hairs and goosebumps... The original concept for the photograph was just an area of skin and fur or wool next to each other. But through the photography process, we had to include larger areas of skin, because without a suggestion of a breathing body, skin actually looks rather gruesome and lifeless. 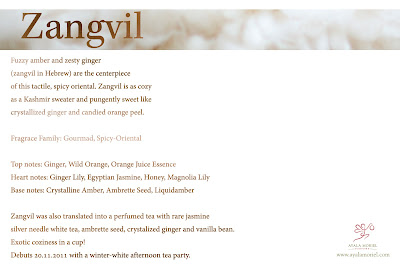 And speaking of skin - the back of the postcard, which tells the story behind Zangvil and details about the notes is printed in multi-coloured fonts in the various shades of the skin photographed for the front; which when isolated from the context (aka light and shadows on skin) looks like a palette of various skin colours.

So, exactly a week from today, I will be hosting an event that celebrates the tactile softness of ginger and amber in teh Zangvil perfume - with a tea party menu that is derived from the perfume, and focuses on white and muted coloured food with exquisite texture (see more details about the tea party in the previous post).
Back to the top