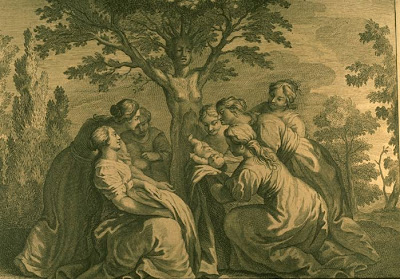 "Birth of Adonis" by Picart
"L" is for "Love" - and also labdanum and licorice – a couple of aromatics we can demonstrate affection with. However, labdanum is not easily obtainable and has very little other use besides perfume (not to mention very sticky and frustrating to work with if you are just starting out); and licorice, despite being recently found as the most arousing scent for women (along with, ahum, cucumber...) - technically speaking it is more of a flavour with a strange sweet sensation, whose fragrance is borrowed from star anise and aromatic seeds such as anise and fennel.

Therefore, we'll quickly proceed to the letter "M", where both musk and myrrh assert their aphrodisiac properties over men and women alike. And we'll further narrow down our investigation to that of myrrh, since musk is not legally obtained throughout the world and have become a nearly extinct perfume material.

Myrrh comes from Commiphora myrrha, a desert shrub that grows in North East Africa and South West Asia - in other words the areas surrounding the Red Sea (Yemen, Somalia and Ethiopia). When the bushes’ bark is injured, they produce tear-shaped gum oleoresin which is harvested by the nomads (they also make their own incisions in the bark to produce more resin). 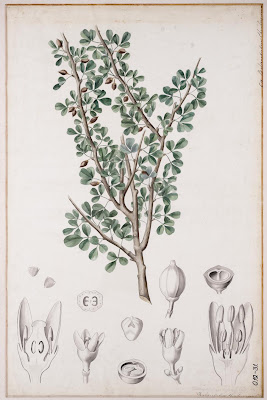 Interestingly, the Greek myth of Myrrha tells the tale of a the young beautiful daughter of the king of Cyprus (his identity is not entirely consistent), who refused all her suitors since she was deeply in love with her father. Devastated with her forbidden love, she decides to take her own life, only to be found by her nurse. In order to save her life, the nurse promised Myrrha to help her pursue and seduce her father, which she did on the next opportunity, keeping Myrrha’s identity in the dark (literally). The affair took place over several days (or months, depending on which version of the myth), until one day the father’s curiousity got the best of him and he hid a lamp in the room in order to reveal her identity. When realizing it was his own daughter he was having an affair with – he drew his sword to kill her. Myrrha fled and ran away, saving her own life, as well as the unborn child she was carrying – her own father’s son. She wondered in the deserts of Ethiopea for nine month, until it was time to give birth. Begging the gods for help they took mercy on her and turned her into a tree, who shortly after split open and with the aid of the goddess of childbirth gave birth to Adonis. The tree's resin are Myrrha's tears, the only remainder of her human form.

Myrrh is steam distilled and also is alcohol extracted to produce a so-called “absolute”. The oil resinifies easily with exposure to air and is a clear, orange-amber colour, and a bitter, rubber like aroma (very much like balloons), that also has strong medicinal connotations as it was used in preparations for soaking dressing for injuries. Wine mixed with myrrh was given as an analgesic, and also to highten one’s consciousness for prayer and meditation. It was given to convicts before their execution. But myrrh's odour profile does not end with the bitter-rubberiness. It reveals diffusive, warm, dry woodsiness and a peculiar sweetness that has depth and sophistication rather than being sugary or balsamic (aka vanilla-like). It is a component in countless perfumes, though its influences are often subtle and it has never asserted it's spot in this family as obviously as some more aggressive materials (i.e.: patchouli or cloves).

There are other related species from the Commiphora genus which yield a fragrant resin (C. gileadensis is the elusive “Balm of Gilead” that is mentioned in the bible – also known as “Balsam of Mecca”, which is native to Southern Arabia and grows wild in the Judea desert of Israel and Palestine. Another notable species is C. guidotti, C. opoponax and C. holtziana - aka Sweet Myrrh or Opoponax, which is a less bitter and medicinal and has more of a musky animalic character with hints of celery/lovage nuances (please note: there is a fair amount of confusion regarding the true identity of opoponax – something that I should dedicate a whole article to).

Myrrh is not an obvious aphrodisiac. It is far better known for its significance in religious rituals as well as it's medicinal applications. Myrrh is the first ancient resin found in Sumer that was used as incense, perfume and medicine. In ancient Egypt, it was burnt in temples at high noon, and is associated with Isis - the lunar goddess of fertility, and the most important feminine archetype in Egyptian mythology. While frankincense was associated with Rah, the sun god, and considered to have a a masculine, or projective energy; myrrh represents female, or receptive, energy. Myrrh is also one of the key elements in Kyphi - the complex Egyptian incense with 16 or more aromatics that is considered to be the most ancient perfume of them all (Kyphi was worn as personal perfume, burnt as incense and ingested for its medicinal and therapeutic qualities).

Another known use for myrrh in ancient Egypt was in the mummification process - this is what was used to stuff the stomachs of the deceased Pharaohs, along with cassia. Myrrh is mentioned in the New Testament first as a gift to baby Jesus from the three magi; and towards the end of his human life it was brought by the three women at the foot of the cross to ease his suffering (another reference to myrrh’s analgesic properties).

“A bundle of myrrh is my well-beloved unto me; he shall lie all night betwixt my breasts” (Song of Solomon 1:13) – a chunk of myrrh would be worn as a pendant in its native desert countries where the water is rare – and as the sweat streams down one’s neck, it will melt some of the resin and give its wearer a cleansing scent. It might also be one of the references that points to Queen of Sheba as the female character in this piece (she also repeatedly refers to herself as dark-skinned).

“I arose to open to my beloved, and my hands dripped with myrrh, my fingers with liquid myrrh, on the handles of the bolt” (Song of Solomon, 5:5).

“I am come into my garden, my sister, my spouse: I have gathered my myrrh with my spice; I have eaten my honeycomb with my honey; I have drunk my wine with my milk: eat, O friends; drink, yea, drink abundantly, O beloved” (5:1)

“His cheeks are as a bed of spices, as sweet flowers: his lips like lilies, dropping sweet smelling myrrh” (5:13).

And there is no more puzzling and elaborate beauty ritual than the one that Queen Esther had to go through to be accepted by King Achasverosh:
"... for so were fulfilled the days of their anointing: six months with oil of myrrh and six months with sweet fragrances..." (Megillat Esther, aka Book of Esther, Chapter II, 12)

Like frankincense, myrrh resin can be easily obtained in many church stores, and you can burn it on charcoal in a most primordial way that will connect you to how this precious perfume was used thousands of years ago.

For seductive applications of myrrh oil, make your own anointing body oil by placing 7 drops of myrrh in 1 tablespoon (1/2oz or 15ml) of cold pressed almond or olive oil. Use for a slow and sensual full-body massage with your lover, proceeding from head to toe.