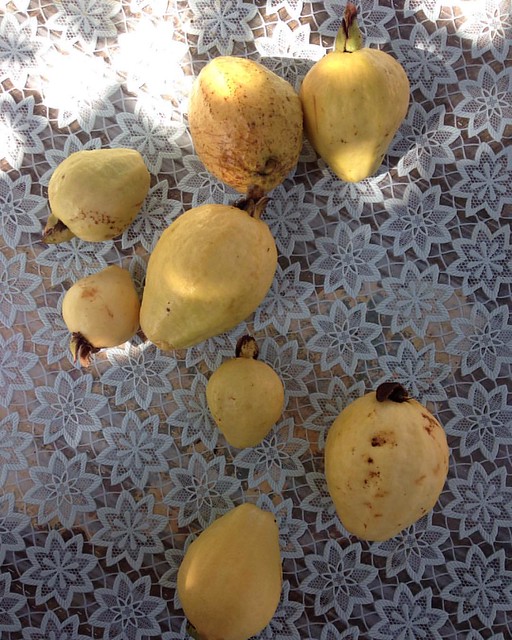 Autumn in Israel has a completely different feel to it, having very little to do with fallen leaves or spooky celebrations, and more to do with the sunlight mellowing and the days shortening. Being on the merging point of three continent, this is a season of migrating birds (southbound from Europe, mostly), striking white flowers that rise fro the dead hay of summer, and carob blossoms with their disturbingly sexual smell.

There's also an overwhelming abundance of fruit that are coming out now, literally falling to the ground daily. Guavas are one of the most symbolic aromas that dominate this season. A single fruit will suffice to impregnate the air of an entire home, and families are often divided based on their attitude to this fragrant fruit with grainy flesh and creamy seed-filled core. 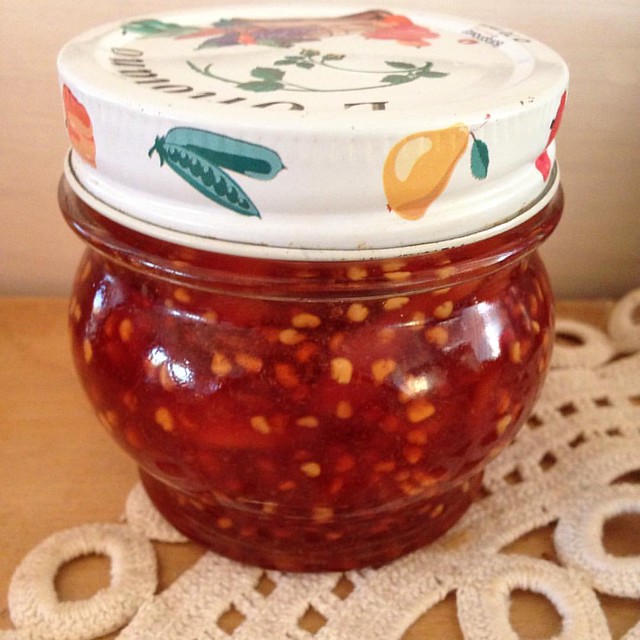 My mom's trees are bursting with fruit, and even though we try to eat as many as we can, we're running out of ideas for what to do with them. Either way, they make a great environmental scent (at least for those who like the fragrance) so no complaints for having a basketful in each home in my family's little "neighbourhood". We already made a parfait with them (it was supposed to be gelato but I put too much gelatine so it congealed well before getting a chance to be frozen). I think we will need to make something else with them to preserve their goodness - maybe a jam or confiture if I can find a good recipe. Guavas also make excellent candy - such as the popular Mexican "Rollo de Guayaba" - a rolled fruit leather of sorts, and guava pate, very similar to quince, but often packed in flat wide cans. Guavas are also used in cooked and fresh, Cuban-style salsa (the pink guavas, which are more watery and less fragrant, go particularly well with tomatoes and onion). Paired with soft cheese, guavas make a sweet filling for empanadas. 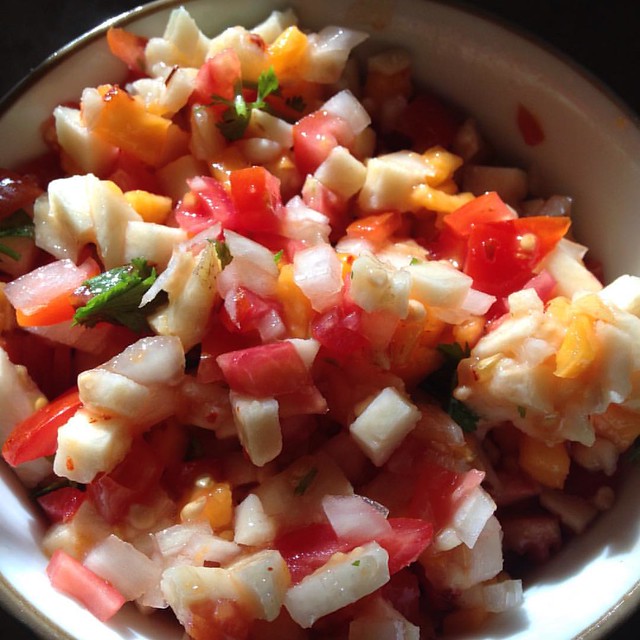 Guavas belong to the Myrtle family, which may sound surprising, but when you bite into a firm fruit, or one that is not all mushy and ripe yet, actually makes sense. There is a fragrant green herbal note to guava. And that is the stage I enjoy eating it the most - when the part that is close to the stem still resists the bite a little bit, and has that slightly acrid taste while the rest of the fruit yields to the teeth and melts in your mouth. When the fruit is completely ripe, it has less pleasant odour in my opinion, suggestive of stinky feet.

To further explain: (E)-2-hexenal is an important component of strawberry's fragrance, and (E)-3-hexenal is a green-smelling aldehyde, reminiscent of fresh cut grass and tomato leaves. So that partially explains why the unripe fruit is so interestingly fragrant and why strawberries and guavas go so well together. The fruit esters that develop when the fruit ripens - Z-3-hexenyl acetate also appear in berries such as blueberries and strawberries, while E-3-hexenyl acetate is described as the green odour of unripe bananas and pears. α-humulene is an isomer of caryphyellene, and is also responsible for the characteristic smell of cannabis - which might explain the offensive odour of the ripe fruit. β-bisabollene has a sweet taste and a balsamic odour, and also acts as pheromone in fruit flies (which is why they probably like ripe guavas so much).

Guava's objectionable aroma prevents them from becoming popular as a perfume note. And when they do make an appearance, it seems to be in commercial-smelling fruity florals and tropical-themed fragrances that I don't usually even bother sniffing. If you can enlighten me on a good scent with guava note I'd be grateful.