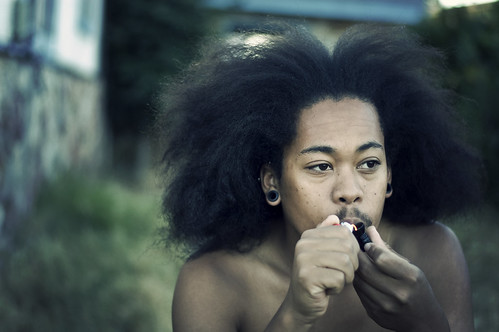 Sorry to disappoint you, but Africa Stone will not get you high. It has nothing to do with ganja. Nor is Africa Stone a precious rock or a mineral (although it does have some geological significance). Rather, it is a more romantic and mysterious sounding name for a fossilized metabolic product derived from the droppings (in other words: pellet-shaped poop) of the African-in-origin animal called Rock hyrax. Other names for it are rock badger, rock rabbit, Cape hyrax, or dassie if you are in South Africa it. In Hebrew Shaffahn Sela, and in Arabic وبر صخري ("wabr sakhri"). It roams not only in Africa, but also the Middle East - and can be found wild in Israel and Jordan, where it is also notorious for spreading the nasty skin diseases leishhmeniasis, unfortunately.
This unusual yet commonly spread mammal has an appearance reminiscent of a large guinea pig, yet is surprisingly related to the elephant and the Sirenians (herbivorous sea mammals, including the manatee and other sea "cows"): all belong to the Paenungulata clade.  The rock hyrax (Procavia capensis) is a mammal from the Afrotherian superorder and is the only genus in the order Hyracoidea (and the only member of the family Procaviidae, which kind of defeats the purpose of belonging to a family at all...). The rest of its relatives, creatures from the Paleogene period have become extinct long ago. Hyraxes are relatively contemporary, having emerged in the relatively recent Neogene period.
There are several curious things about its anatomy, which point to this direction: first of all, it has two unusual incisors, which are common to the tusks in elephants and dugongs. Secondly, its nails are flat much like the elephant's. 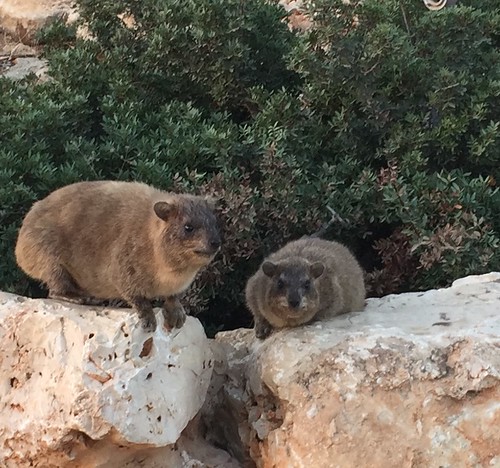 Rock hyrax is a territorial animal that lives in large colonies in caves and rock crevices throughout Africa and the Middle East. They usually have one male with a large herds of females and youngsters. The male acts as a sentry to the group, and will call out to warn them and get them all to return quickly to their cave. The male is mostly the one that marks their territory with highly odoriferous droppings that get their scent from animal pheromones that both the male and female excrete.

Hyraceum: the aged and fossilized droppings of the rock hyrax. Because the hyrax lives in the same areas for generations. Their droppings and urine compress and petrify, and become almost like a fossil overtime. Some of these middens can be even 50,000 years old, and can show layers of evidence from bygone times [1]. Similarly to the amber from Pinus succinifera, this fossil retains its scent. And this is why it is so useful for perfume making. In South African folk medicine, hyraceum is called Umchamo wenfen [2] and is used to treat snake and scorpion bites [3], as an antidote for poisons, for abdominal pain, to ease pregnancy, to treat diabetes and prostate problems, as well as epilepsy and convulsions. Some research shows that it has an affinity with GABA-benzodiazepine receptor, which is how it supposedly helpful in stopping seizures, much like the drugs lorazepam and diazepam.

Its use in perfumery is fairly new though, and becomes increasingly more popular as it can replace civet and castoreum without the need for hunting or animal torture.
Constituents: Unknown.
Physical appearance & characteristics: In its raw form, Africa Stone does resemble a rock more than an organic matter. Depending on its age and how petrified it is, hyraceum can be very hard and difficult to break down, or it can be more sticky and resin-like. The pure absolute is a dark-brown, opaque viscous liquid not unlike molasses.

Volatility rate: Base note and a fixative
Odour description: Leathery and fecal at the same time. Gamey, animalic, nutty, floral, yeasty/mushroomy (like porcini/cèpes), phenolic, tanned hydes, fur, dark earth, sweat, gassoline. Putrid, like a carcass.
Perfumery Uses: An animal material that is cruelty free and possesses many characteristics that are similar  to both civet and castoerum. Can be used in minute quantities to amplify floral compositions and provide fixative support to any genre. Use in high doses in Russian Leather type fragrances in place of castoreum. In moderate doses in all categories such as Chypre, Fougère, Oriental, etc. to give a perfume the animalic depth it requires. It does not serve exactly as a substitute to civet and castoreum, as it as it does not have the same transformative power unique to these animal materials, where the smaller amount completely transforms the composition even if its own aroma cannot be clearly detected. Perhaps the Gods of Perfume require the sacrifice of animal life or welfare to grant the perfumer with such an effect.
Perfumes with Hyraceum: Hyraceum is a relatively new raw material in the fragrance context. A quick search down Basenotes directory of Africa Stone leads to a very short list of fragrances, and all of them contemporary by niche houses, including Fig by Aftelier, Foxy and Chinchilla by Dawn Spencer Hurwitz, Carmine and Kazimi by House of Matriarch, Gracing the Dawn by Roxana Illuminated Perfume and a few more. Curiously, there is one perfume by Penhaligon's from 1870, but I suspect this is a 2011 reformulation by Bertrand Duchafur that added this ingredient. Under Hyraceum you'll also find a few others, mostly by brands I don't recognize, and then Phenomene Verte II by Parfums Lalun (the 1st one was wonderful). By yours truly, you could first find Africa Stone in the now defunct Gaucho, which was launched the same year as InCarnation. More lately, Treazon, Narkiss and Inbar also contain this note.

Aromatherapy uses: None.
Blending Tips: Pre-dilute to 1-3% for subtle presence and to benefit from its fixative advantage without changing the personality of your composition too much. This is particularly improtant if you’re working with 10% dilutions with most of your building blocks. Use in as high as 15% dilutions in composition that require this note to be noticeable and dominant (i.e.: Leather, Tobacco, Orientals, etc.), or if you’re using pure essences (undiluted) when composing. Hyraceum goes well with costus, labdanum, vanilla, tobacco, tuberose, jasmine, castoreum, cade, narcissus, orris butter, agarwood, etc.


Safety considerations: None known. Not for flavour use.