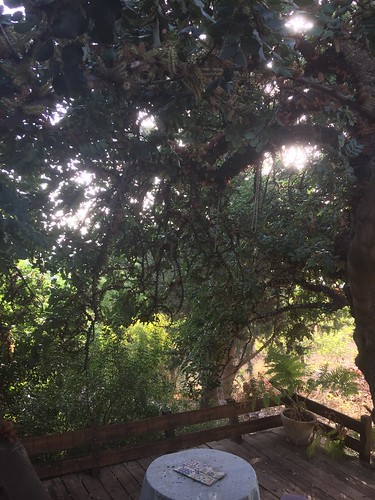 There are two carob trees by my house, a long-married couple, male and female, probably centennials. The male lives right beside my porch and dining room windows. I built the house right next to it on purpose: It gives shade and privacy, and lowers the temperatures in the building  by almost 5 degrees. But nothing is for free in this world, as they say, and the price we pay comes when the carob trees are mating, trying to make little carob "beans", also known to some as St. John's Bread. Carobs are generally edible, but this female produces dry and bland fruit, which only grafting could fix. 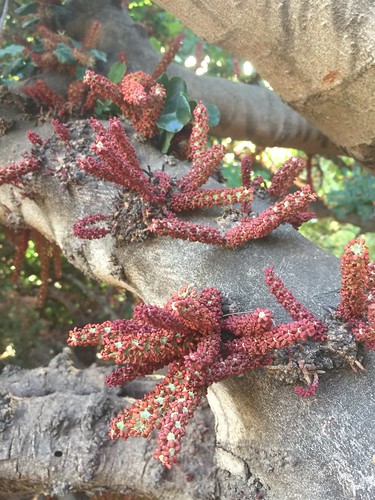 Carob buds, red and innocent, before the open and assault the senses with their pollen and perfume. As you can see, the tree doesn't waste any space and brings flowers from every inch of its body: branches large and small, and even the trunks shoot out little tine columns covered with sulfur-yellow pollen. The female flowers are scentless and just look like clusters of tiny green carobs... 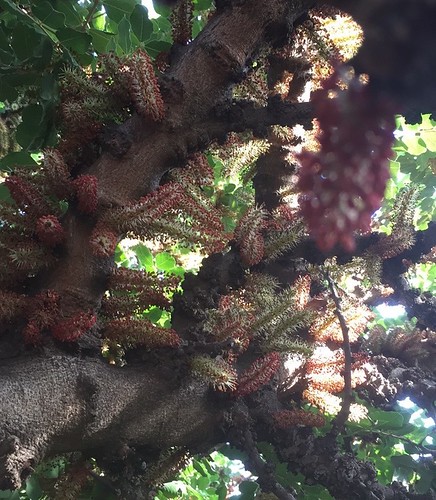 The smell of the male flowers is a nostalgic memory from the many falls I spent as a child playing under these trees and resting in their shade. To me it's a basic childhood memory like glue, pencil shaving and your favourite ice cream bar. However, anyone who comes into contact with these trees after reaching sexual maturity, would find the aroma vulgar if not repulsive. This botanical replica of the juicy secretions of male and female copulating is bang-on. Except for one thing: this botanical orgasm will last for about a month.

P.s. There is a scientific explanation for the sexual smell of carob blossoms: They contain the polyamine Cadaverine,  which is also found in human semen (and cadavers...), which is produced by breaking down the amino acid Lysine. Of course the carob tree does that in order to attract insects that typically feed on cadavers.
Back to the top