Home / SmellyBlog / Burning through the Desert 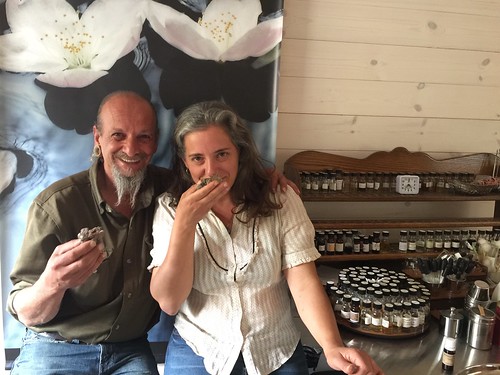 A few months ago (the last day of April, to be exact, which was also the first day of my Orientals week-long course), I had the pleasure and honour to host a special guest throughout the day: Dan Riegler of Apothecary's Garden - a purveyor of fair trade resins from around the world - especially frankincense and myrrh that are wild crafted in the traditional methods in countries such as Somalia, Yemen and Kenya. He also sources Cretan labdanum, and other rare raw materials, and sells resin-centrered products that he concocts himself, which you can find on his online shop. One of them being a highly fragrant moustache wax which basically surrounded him with a cloud of frankincense - so obviously he made an instant good impression on me!

We started the day at the Baha'i Gardens in Akko (which deserve a full post dedicated to them) and then went to my studio to make incense - and burn a bunch too. Little did I know what I was signing up for. On top of the usual things I burn for this class (palo santo chips, sandalwood incense sticks, one type of myrrh and frankincense resins and my own rendition of Egyptian Kyphi) - Dan had a trunk-load of resins that he just imported from Africa, and was immensely kind and generous to share with us the most incredible incense resins with me and my class. We spent the afternoon burning rare myrrh, olibanum, and also some gums I never knew existed, namely Sandarac and Ammoniacum, the latter of which totally blew my mind.

I learned so much from Dan, about the resins (and the other raw materials he curates and sells), how they are harvested and collected, the chemical makeup of the resins and how it affects the stages of burning (it turns out that incense resins also have top, heart and base notes) - and this post is just a little taste of all the beautiful resins we burnt when he was here. I'm looking forward to meeting him again on his next visits in Israel on the way to the African continent. 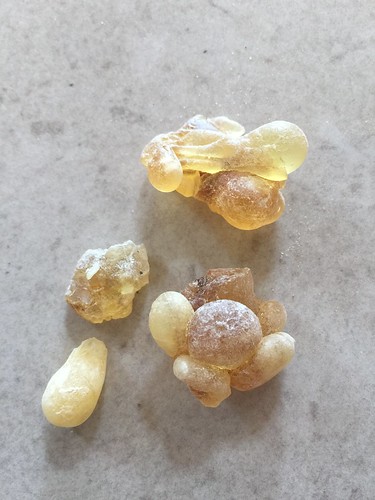 Frankincense usually comes in "tears" shape as this Boswellia carterii - but not always. Below is a specimen of the less known B. neglecta that look more like a chunk of resinous granules. B. carterii has the characteristic, most unmistakable scent of frankincense - beginning with sweet citrus notes of lemon drops and orange candy and continuing into more resinous, woody and even balsamic, caramel-like nuances as the incense burns on the charcoal.

While looking pretty much the same, other frankincense species provide further nuances and a whole frankincense burning comparative study (or incense games a-la Japenese Koh-Doh) can easily occupy half a day. Compare this to Maydi (Boswellia frereana) which albeit its slightly herbaceous (sage-like) opening, is more subtle, woody and perfumey. In fact, it smells almost powdery like violet and iris. Ethiopian frakincince (Boswellia papyrifea) is even finer with its suave, light perfume notes, slightly sweet and with notes of burnt sugar at the end of the charcoal burning process. 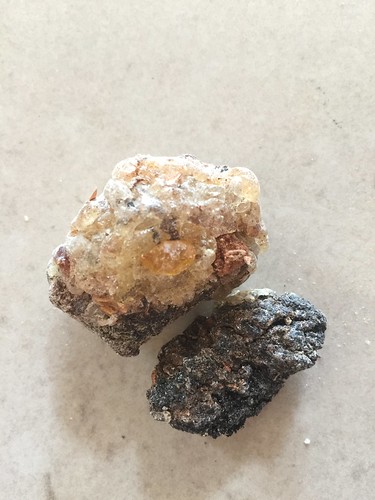 Boswellia neglecta is endemic to north Kenya and comes in white and black forms (as you can see in the photo) and is not widely known. The white and the black smell significantly different. The white begins resinous-green, piney and mysterious, surprisingly juice like crushed leaves with hints of parsley, galbanum and ammonia (smells a lot like amoniacum).  It has a hint of sweaty note, a little like coriander seed. The final burning moments bring to mind the smoke coming out of autumnal piles of fall leaves.

The black neglecta smells completely different - you wouldn't think it came from the same plant: it smells dark and looming, like moss, mushrooms, decaying fall leaves, peat, forest floor and hints of campfire. It's surprising and magical that a resin can possess so many different facets. 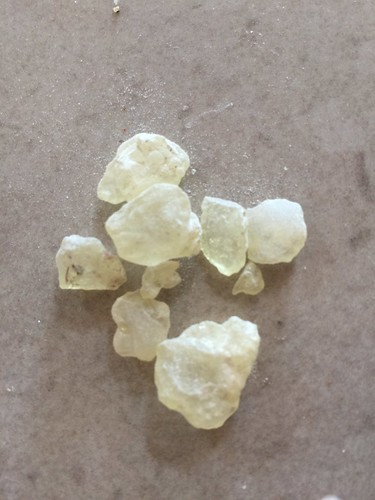 Sandarac (tetraclllyris) comes from Malta and just like its pure milky appearance, burns clean with a woody-balsamic-resinous scent that is fine and very pleasant. It's a little bit like elemi, a little like mastic but not quite. There is a tiny hint of seashore to it that I only detected after many times of burning. It is quite lovely, even if underwhelming at first impression. 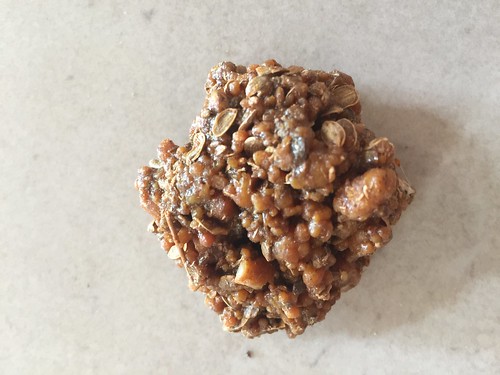 Ammoniacum is intense and pungent, like a mixture of galbanum, asafoetida, sulphur, greens. It it a very interesting odour but I suspect it would have better effect in magic and exorcism ceremonies rather than contemplative incense rituals. 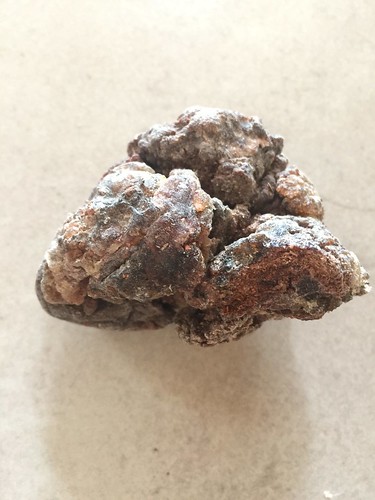 Commiphora confusa, as the name suggests, is a type of myrrh that is hard to identify, and for several reasons: the flowers look different on each plant, the resin looks different as well - and the most surprising of all: it smells more like frankincense than myrrh. 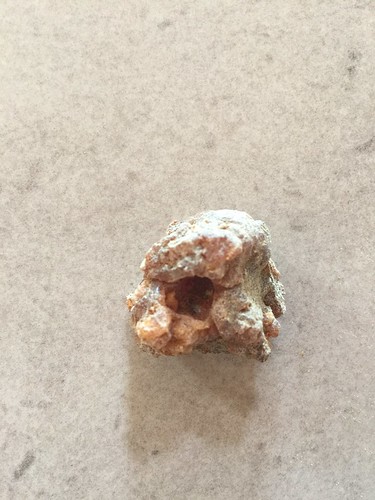 Commiphora myrrha (from Ethiopea) has the characteristic bitter, rubbery scent when burnt, and is what I'd imagine the Queen of Sheba to wear on her neck when seducing King Solomon. 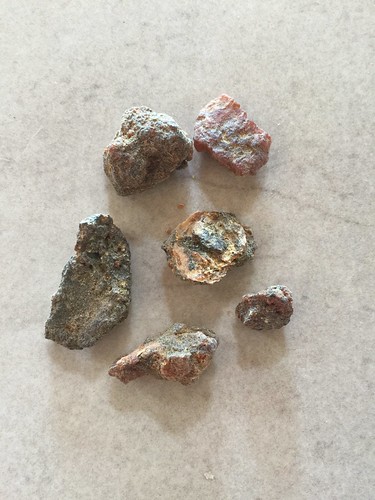 Commiphora kataf (from Kenya) has pieces of wood in it (which would change the smell of the smoke depending on which chunk you burn). It has a strange, sulphuric-sweaty odour. I guess you could call it spicy, as it has a hint of cumin in it too. Overall it reminds me more of the smell of food than incense - barbecuing kebabs comes to mind. 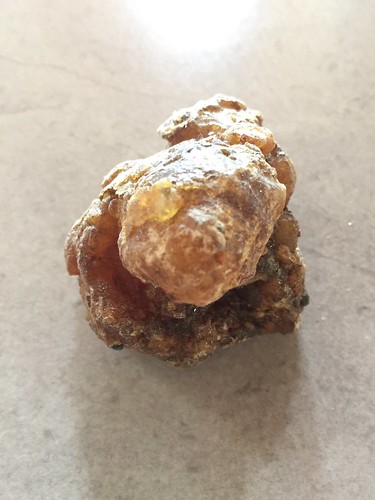 Commiphora holtziana does not smell like myrrh at all to me. It's more woody than C. myrrha, and a tad fresh to start with. Dan describes it as briny and sea-like but I'm not getting it. 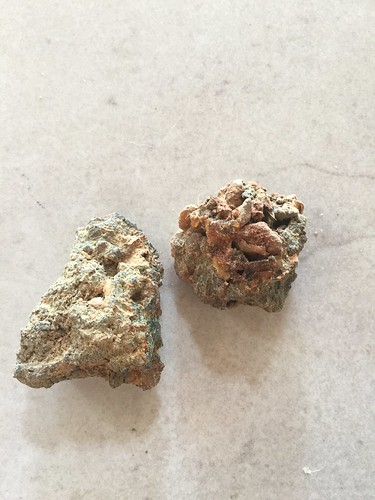 Arabian/Yemeni Myrrh is by far the most incredibly beautiful myrrh resin I've ever burnt. Although it came in a strange looking chunk, containing pieces of the plastic bags used by the collectors, and even a piece of wool yarn, it has the most fantastic scent, like a perfume on its own accord. It reminds me of the unique "version" of frankincense that B. papyrifea offers. I would love to have this as an essential oil and create a perfume with it.