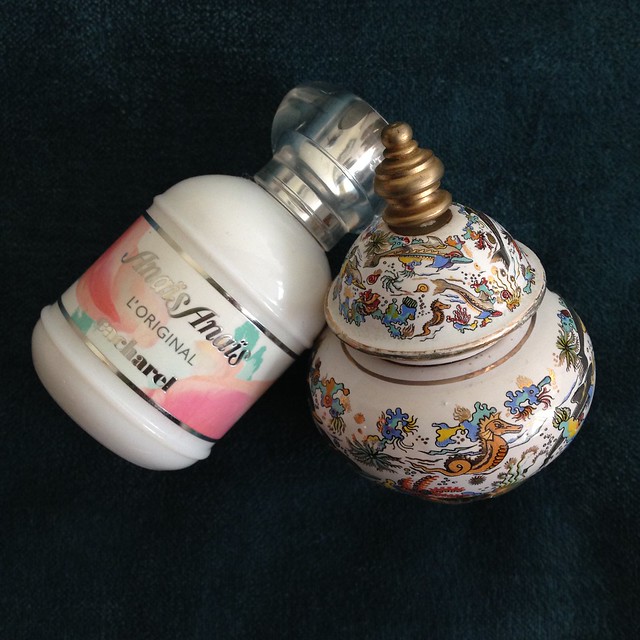 The 70s were all about soapy-green florals: Ivoire, No. 19, Laura Ashley No. 1, etc. Cacharel released Anaïs Anaïs  in 1978, and it fits-in nicely with that trend, but also has its own personality, even if understated in comparison. While the others in that genre tend to come across as sharp and angular and exude an air of intimidating and cool-headed professionalism - Anaïs Anaïs is soft, feminine and lady-like. It is very pretty, approachable and agreeable, yet at the same time it's not at all boring - in fact, it is a classically structured Chypre, yet with more modern ingredients that still to this day make it smell fresh and dewy.

In the late 80s and early 90s it was a very popular and "safe" scent to wear for younger girls - or give as a gift - as you'd be hard-pressed to not admit that you at least tolerate if not like it. It was the precursor for many pleasantly scented double-milled soaps.  Which is why I probably felt it was too soapy when my grandmother gifted me one of those after a trip abroad. It was also too heady and too floral for me. I guess my tendency towards deeper scents has began early on... The other important reason I was disappointed with it was that on another trip to Greece, my grandmother brought me a clever little pot of porcelain that had Anaïs Anaïs knock-off in a solid perfume form at the bottom, and a liquid one inside the lid (pictured above, next to the original). Strangely enough, that knock-off was much better than the original: it wasn't as sharply floral, and the base was a gorgeous incense.  The florals were not too heady - and had a slightly waxy, lipstick-like quality about them which made them softly purr. I remember wearing it in the wintertime and just sniffing my wrists all the time, near the wooly smell of the sweater... Rather quickly, I finished the whole thing - both liquid and solid. This was the first perfume I've ever owned - and still do (not only because I'm so sentimental that I keep little objects like this; but because the smell remains in that pot, after all those years!).

Anaïs Anaïs opens with a fruity-floral melange that is at once freshly green and soft. How is that achieved is beyond me - because there is a definite presence of galbanum, cassis, hyacinth and Madonna Lily there - neither of which is particularly shy or soft on its own. This bouquet is so well-balanced, and only moderately aldehydic in a very tasteful, seamless way (perhaps owing to the honeysuckle note) - that it's difficult to pick one note in particular, and to me this is part of the magic of perfume, but jasmine and rose peak through if you pay close attention... The heart continues to be green and floral and elegantly leads to the oakmoss-laden base, where vetiver and white musk have a strong presence, as well as modest hints of sandalwood and patchouli (the latter adding more of an earthy-green dimension rather than any allusion to hippie-ness). But before that dryout phase completely takes over, you'll find a surprising incense phase, that is not exactly like any particular incense "flavour", and combines sandalwood with a little peppery greens and cedarwood notes.

Recently, I found a little 30mL bottle of Anaïs Anaïs eau de toilette - and immediately purchased it for my daughter. I tell her that her great-grandma used to wear it and gave it to me when I was a young girl. She calls it "Pink Flower Perfume"...  I thought it would be fun to have it around, and get her some early perfume education about what young girls should wear (instead of those horrid celebrity scents that are kicking around). Also, I won't lie, I was planning to steal some from her so that I can sneak in a review of it at some point...

It may not smell exactly like the original did (even though it is subtitled L'ORIGINAL). But I didn't know it well enough at the time to notice the change. I do, however, find a resemblance to a much later scent, Calyx (1987), although of course not quite as fruity as that; but they both now have a very strong connection with ancillary products (Calyx is the mother of all Herbal Essence type of shampoos and hair products, which are still highly in demand). They both have a very similar structure, with green and fruity notes at the top (Calyx has more tropic fruit notes, i.e. papaya, guava, passionfruit and mango; while Anaïs Anaïs uses more "traditional" black currant bud to achieve the fruitiness). Both have Madonna Lily and Lily of the Valley at the heart, and both conclude with oakmoss, vetiver and white musk. Both also smell wonderful on my young daughter's skin, and I only wish we'd smell more real perfumes on young girls these days, instead of the fruit-punch cocktails sprinkled with polycyclic musks and vanillin that have long overstayed their welcome (IMHO).