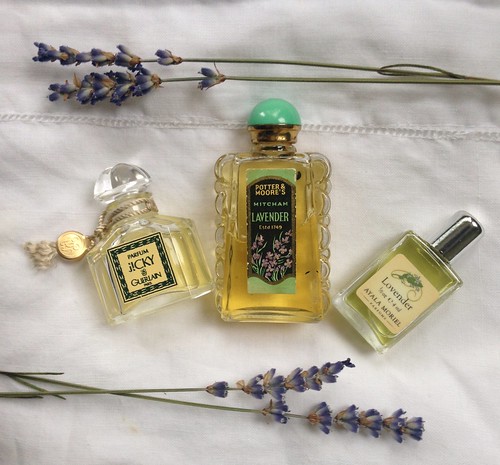 LAVENDER'S PERFUMERY USES & APPLICATIONS
Lavender on the perfumer's palette provides for a range of purplish-blue hues, metaphorically speaking, of course. The oil itself is clear; and the absolute literally is a turquoise colour.

Lavender Toilette Waters
The earliest application of lavender in perfume is in the classic Lavender Waters - which the English perfected. Many historic recipes can be found for these type of eaux. Another sub-category of which is the lavender-amber waters, which include, in addition to lavender, either amber or ambergris.

Eaux de Cologne
Another important historic use of lavender oils is in the Eaux de Cologne type of fragrances. Here both lavender and lavandin are used extensively. Lavender imparts a softer, more floral nuance, where as lavandin gives a more herbaceous edge, often in synergy with rosemary or mint. Lavender can be found in countless classic eau de clone formulations, such as 4711, Guerlain's Eau de Cologne Impériale (1853) and Eau du Coq (1894) etc. Florida Waters are a New World interpretation of the Eau de Cologne in which lavender takes a more prominent role, and also includes lime, cloves and cassia bark.

Lavender Soliflores & Gems
Lavender soliflores are a richer, more developed and rounded version of the lavender waters; or simply a more concentrated form. Classic examples are: Yardley's English Lavender (1873), Lavande Velours (Guerlain), Floris' Lavender, etc. Then there are some more sophisticated, layered and exciting renditions such as Jicky (Guerlain), the liquorice-velvety Brin de Réglisse (Hermes), my own Lovender (part of The Language of Flowers soliflore collection) and let's not forget the underrated, wonderfully vanillic Caron's Pour Une Homme.


Fougère
The first use of synthetic aroma chemicals was marked by the creation of Fougère Royal, a concoction that used for the first time a laboratory-made coumarin. But coumarin is only one of four key components that are crucial for creating fragrances of this genre, the other three being oakmoss, linalool and lavender. One could argue that the bare bones of Fougère place lavender in an even more important place, if you strip it down to an even more simple accord of oakmoss-and-lavender, since the other two components (coumarin and linalool) naturally occur in lavender.
Other famous members of this family are Azzaro, Grey Flannel, Brut, Canoe, Amber & Lavender Cologne (Jo Malone's), Jazz (YSL), Xeryus Rouge (Givenchy), etc.
Back to the top