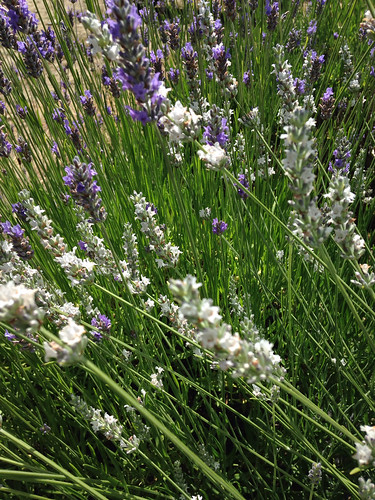 LAVENDER VARIETIES
Lavender is a native of the Mediterranean basin first and foremost, but has such a flexible and hardy constitution, that it is now cultivated all over the world. Of particular interest is English lavender, which develops unique characteristics (sweet and warm) despite the lesser amount of sunshine than ideal that it receives than in its native Provence; and I've sampled some exceptionally beautiful lavenders grown in relatively mountainous areas in India (Kasmir) and also from Tasmania (Australia). And even the Canadian ones I've experienced, despite its relatively low yield, is lovely when grown with tender care in small organic farms. Whichever is the case, sample your lavender first before you cast an opinion based only on the stamps on its passport.

Not only the type of lavender grown, but also where it has grown and under what conditions - the resulting aroma profile would be noticeably different. The following are brief impressions of several specimens I've studied and worked with. Most of them (unless otherwise specified) are from Lavandula angustifolia. Lavender that was grown in higher altitudes develops a much finer aroma due to a higher concentration of esters. But that is not the one and only reason for the superiority of high-altitude lavender: in high altitudes, water's boiling point is only 93 celsius, which means that less components get ruined in the process, and the more of the delicate esters also remain in the finished oil!

The reason esters are so desirable? They form among the most pleasant-smelling (functional) group of molecules. Among the esters you'll find many fruity nuances, but not nearly in-your-face as the fruity aldehydes. Most of the esters found in lavender oil are terpene esters: Linalyl acetate, geranyl acetate, octene-3-yl acetate, lavandulyl acetate (which is an insect pheromone, and might explain why the bees love lavender so much!) and neryl acetate. I detect a hint of pear in the high-altitude lavenders I've smelled, which must come from the latter (it is described as a floral, rosy, sweet, soapy, fruity, dewy with orange blossom and pear-like notes).

The effects of terroir and the particular hybrid or type of lavender selected for distillation, as well as the method of distillation makes a difference in the finished raw materials. This could be either very subtle (as the difference between the same species, L. angustifolia, in various countries or elevations) or extremely different (as we'll see when comparing lavender that was steam distilled versus solvent extraction).

The following are my own impressions from specimens that are in my collection:

Lavender Hydrosol
Artisan distillation by Dabney Rose. Curiously, it was distilled from the Mailette variety, while immersed with an amethyst crystal. It has a pure, clean aroma and the coumarin content is noticeable. I use it as a facial toner, but high quality lavender hydrosol could also be used in small amounts in eau de colognes as well.

Lavender grown in high elevation (France)
Herbaceous, a little like rosemary. A hint of rose-geranium. Slightly musty undertones. You can kinda smell it had hard time growing on the Alps... Smells like a very short, struggling plant. Dry down: hints of musk & wood base.
Lavender Maillette (France)
A cultivar of L. angustifolia Dray, clean, floral, woody. Sweet, hint of bery. Crystalline. Clean, clear, almost rosewoody. Has a higher content of linalyl acetate than any other lavender cultivar.

Wild Lavender (France) - Lavandula angustifolia
Opens sweet and soft and floral, almost rosy even. Dries down into a sweet and grassy, airy lavender.

Lavender Jerusalem
Wild lavender from the mountains surrounding Jerusalem that I had many years ago and ran out of. A little more camphoreous and herbaceous than the others reviewed so far. It might have been lavandin, but the labeling (in Hebrew) did not have the scientific name, unfortunately.
Lavandin (Lavandula x intermedia)
A hybrid which was created in the 1950s, and therefore does not produce seed but requires slips to reproduce. Lavandin is a cross between "Spike Lavender" or "Aspic" as it's known in French (L. latifolia) and "True Lavender" (L. angustifolia), this variety has a very similar appearance to true lavender, except that it has longer, slightly winding flowering tops. It has a tremendously higher yield at 2-2.5% per hectare (compare to L. angustifolia at 1% per hectare). While this is a blessing for the farmers and distillers, from a perfumer's point of view lavandin is inferior to lavender. The higher yield is due not only to the longer flowering tops, but also to a higher content of components such as cineole and camphor. Lavandin in general is less complex and more rustic than lavender. Comparing to the highly resourceful lavender - lavandin is relatively useless in aromatherapy and for healing purposes; but has been enthusiastically embraced by functional perfumers, who use it primarily in soaps, candles and household cleaning products due to its low-cost appeal and less delicate constituents. Lavandin also makes wonderful sachets that repel insects such as moth from ruining natural fibres.

Lavandin Grosso (Lavandula x intermedia)
What is referred to by some as "French Lavender" is really lavandin - a cross between true lavender (L. anguvstifolia) and spike lavender (L. latifolia). It is what is most commonly used to stuff sachets that are used to scent linens and keep moth away from wool and silk. Perhaps that is why when I first encountered lavandin oil in Grasse, France - it smelled more like lavender to me on blind tests than the true lavender oil did.
Lavandin gross is one variety of lavandin with an earthy, more camphoreous character than that of true lavender.

Lavender Concrete
Olive green paste. Even more realistically plant-like than the absolute. It is wonderful is créme parfums. It reminds me a bit of lavender tea (either in a blend with other herbs or in a Lavender Earl Gray).
Spike Lavender (Lavandula spicata)
"Spike lavnder (spica) is warm and dry, and its warmth is healthy. Whoever cooks spike lavender with wine, or if the person does now have wine, then with honey and water, and drinks it lukewarm often, soothes the pain in his or her liver and lungs, and makes his or her thinking and mind pure".
(Hildegard von Bingen, "Physica"). In her entry on galangal in the same book (spelled galingale) she prescribes a remedy for palsy made of pulverized galangal, nutmeg, spike lavender, githerut (gith, AKA nigella or black cumin), lovage, female fern and saxifrage. I do not have any essential oil from spike lavender - and it is not much in use nowadays as lavender is far superior to it, and lavandin, its hybrid with spike lavender, has a much greater commercial success.
Seville Lavender (Lavandula stoechas subspp. luisieri) - Spain
I have a L. stoechas bush in my garden, and it has an intensely animals, almost goat-like aroma, recalling herding on the Mediterranean hills. The flowers of this species also look very different than other lavenders - rather than a stem with many little tiny buds, they look more like a spikelet of wheat, with a purple flame of petals at the top.
The absolute I have smells like a non-lavender lavender. Raspberry, hay, almost like osmanthus and linden blossom. Sweet is not the right word but sour isn't either. Fruity in an odd, fascinating way. Dark like a herbal witch brew - over steeped rosemary and sage. Resinous and sweet, a little like fir absolute. 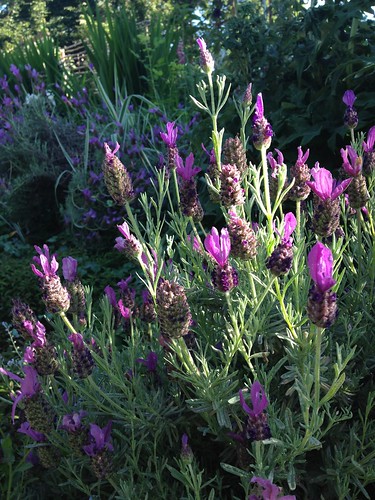