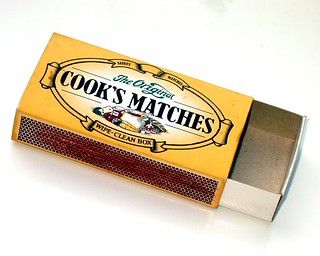 There's a guy across the street in the retirement home, who must have lived a long, nicotine-rich life. He spends about half of the days asking passers by for light. And cigarettes. I gave him matches and lighters on a number of occasions, and even one of my cigars. Every time I have something for him his yellowing face lights up, he quiets down for a few minutes... and by the time I'm upstairs again I can already hear is yelling and soliciting for more tobacco.

Between Leather & Tobacco Week (May 11-15), the neighbour across the street asking for matches all the time,  and my newly found infatuation with Tabac Original - the natural course of events was to try to do matching for the latter.

"Matching this is the process of creating a replica for an existing perfume – it’s akin
to writing a symphony’s entire score by listening to a recording of it. nowadays, perfumers use a GC report to assist them in the process, but still need to rely first and foremost on their nose. matching is one of the most important skills for a perfumer, and one of the best tools to develop your composition skills, which is why you’ve been asked to create a match in many of the exercises throughout this book." (Foundation of Natural Perfumery, p. 176). 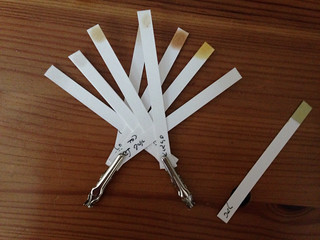 Matching is not something I do often anymore (I did a lot of it in my early perfumery days, as it's a great way to learn composition and study the classics, simultaneously). The reason I don't is because usually it's nearly impossibly to create something even remotely close because the bulk of the fragrance's personality comes from synthetics - some of which are not even naturally occurring. So it's a lost battle from the start. This is also why I refrain from providing any replication services for y custom scents.
Another great challenge of matching is to listen to your nose instead of the brain. In a way it's easier to make matching for something you don't know the name of, or anything about. This way you don't have any misconceptions about it, and that reduces the risk of the "power of suggestion" effect. With Tabac Original, for example: it's easy to assume that there is tobacco in there, and be tempted to add it in. It's in the name of the fragrance, after all! But even my keen nose cannot for the life of me detect the tiniest amount of actual tobacco notes in there. Yes, the fragrance may bring to mind tobacco because its clean, dry, woody character - but there is none of the acrid, leathery, hay-like or even violetty nuances you'll find in tobacco absolute. I'm not saying tobacco won't smell good in there. But it's just isn't there. It's almost easier to think of it as a Fougere - even though it's not that either (there is no moss that I can detect; nor coumarin, which pervades so many masculine fragrances of yore). 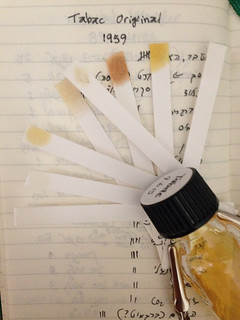 With Tabac Original - it seemed possible. Most of the perceptible and characteristic ingredients, except of the synthetic "white musks" are readily available on my palette. Plus, I thought it would be fun. The "brief" so to speak was not only to make it retain the refreshing vetiver and spice character, but also to refrain from using overtly rare or costly ingredients, so it could potentially be a  "natural drugstore" fragrance of sorts...
So far I'm rather pleased with the results - which utilizes Haitian vetiver as the key component, spiced heart notes of Egyptian geranium, petitgrain and allspice; top notes of lavender, black pepper, ginger and nutmeg. I also had to use some proprietary tinctures of ambrette seeds in lieu of the musk; and ambergris tincture as well to create a bouquetting effect. In that sense I failed to make it a truly cheap fragrance. But it seemed quite necessary for the composition if I were to avoid any expensive florals (for example: I decided to forego any neroli or carnation absolute, both being prohibitively expensive). The tinctures are used in minute amounts, but I won't say either of these raw materials is a run-of-the-mill, easy to find ingredient. It does smell great, though.
Back to the top