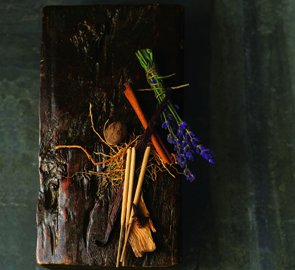 When I lived on the ground level of an old Victorian-style building just a few blocks away, with a hardwood floor and a (non-operaive) fireplace, one of the sample vials of Amber & Lavender fell on the floor and crashed one day without me noticing. I remember laying at bed at night and wondering how come I can smel the cologne of a guy passing by on the street. Living on the ground level that was actually possible just as much as being affected by skunks passing by!
When I woke up the next day to find out that this men’s cologne is still around I was a bit worried… It wasn’t until days later that I found the crashed vial of Amber & Lavender on the floor and had to have a good lough and called my boyfriend to let him know I am no longer worried about the stocker with the sexy cologne…

Amber & Lavender is not so much about amber or lavender as it is about Fougere, and not the most ambery Fougere at that. It’s herbal and clean, with a bold presence and a classical masculine appearance. The base is a tad animalic, even indolic, and a tad spicy. Apparently, this was Jo Malone’s creation for her husband, and I am not surprised. A good Fougere scent is the epitome of masculine scents, and what I associate most with my man.
If you follow some of Jo Malone suggestions for layering with Amber & Lavener, you’d be surprised how versatile this scent is. It is equally warm and fresh, and adds an interesting twist to some of her other scents. The notes that stand out most for me are lavender, sage, cloves, amber and oakmoss.
Back to the top