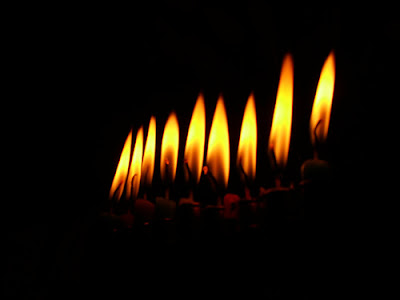 To all of SmellyBlog readers celebrating Hanuka - Hag Urim Samecah (= Happy Celebration of Light)!
It is the first day of Hanuka today, and we enjoyed lighting the first candle last evening, and eating Nutmeg Scented Yam Latkes!

Below are the recipes for both traditional latkes (potato pancakes) and my own original Yam Lateks:

Traditional Latkes
4 large potatoes (any kind is good, and there is no need to peel them!)
1 large onion
3/4 to 1 cup flour
Salt and freshly ground pepper, to taste
1 egg

Grate the potatoes and onion using a grater. Add the egg and mix well. Sprinkle the flour and spices over top, and mix well until all the ingredients are blended equally in the batter.
Heat the oil in the pan. Drop spoonfuls of the batter and flatten them well. Fry on both sides until golden.
These are particularly delicious when served with a bit of sugar on top!
Strawberry jam or marmalade is nice too if you like the contrast of savory and sweet (the onion and black pepper against the sweetness of sugar).
Some like it served with apple sauce and sour cream, but I don't think this is necessary.
If you prefer to keep them savory, serve with Israeli Style Vegetable Salad (see recipe below), or as an appetizer. I particularly like the taste of the latkes when they get a bit of the salad dressing in the plate, but that might be just my thing...

Shred the yam, potatoes and onion in a grater. Add the egg and mix well. Sprinkle the flour and spices over top, and mix well until all the ingredients are blended equally in the batter.
Heat the oil in the pan. Drop spoonfuls of the batter and flatten them well. Fry on both sides until golden.
These are great served with either sweet condiments or as a side dish for savoury food. It can also be a meal on its own - with some salad on the side.

Israeli Style Vegetable Salad
The exact quantities of the vegetables are not improtant. But tomatoes, cucumber, olive oil and lemon juice are mandatory!
Here is a sample version -
5 small hot-house cucumbers or Japanese cucumbers (or half an English cucumber; do NOT use field cucumbers, as they will ruin the salad!)
2-4 small or medium tomatoes, firm but ripe (either Roma tomatoes or Campari tomatoes are the best)
1 red bell pepper
1 green bell pepper
green onions (optional), thinly chopped
juice from 1/2 lemon (I prefer to squeeze the lemon directly into the salad, this way some of the essential oil from the peel makes it to the juice and adds a wonderful lemony aroma!)
1-2 Tbs olive oil
Salt and pepper to taste, but absolutely not mandatory! The salad will be delicious without them too. Other spices you can use is a bit of Za'atar spice mixture (can be found in most Middle Eastern food stores).

Chop all vegetables into small squares and put in a medium salad bowl. Squeeze the lemon juice and pour olive oil. Toss together and serve.

Photo of Hanuka courtesy of dimgol
Back to the top