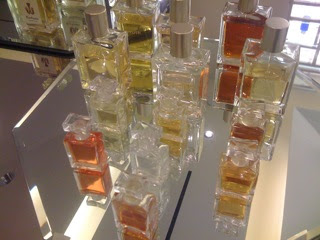 Since I haven't had enough time the day before to smell much at Barneys by Union Square, I had to pay them a second visit before heading to wine country (poor me...). I took the bus down Geary street, which was an interesting people watching experience on its own right, and slowly but surely made my way to the corner of O'Farrel & Stockton. The cosmetics/fragrance department is downstairs, and some of the sales reps already recognized me from yesterday, so I couldn't go incognito, which is my favourite way of perfume shopping.

I wanted to take another look at Yosh's lovely display (which I'm showing you again here) and also explore a few lines that I wasn't familiar with, including the only organic line that seemed to have survived there - Horst Rechelbacher's new company of organic lifestyle brand Intelligent Nutrients, which is basically an organic version of Aveda (even seems to use the same font), released once his non-compete agreement with Estee Lauder expired. Nothing about it is significantly different - similar packaging, similar scents - line certfied organic multi-functional aromas of more complex, aromatherpeutic-smelling perfumes in the likes of the former Aveda Chakra scents (there are also 7 of them...), with names such as Awaken, Attune, Nurture, Restore, Focus... And the other perfumes are very simple single notes - Jasmine or Mint.

The other line I explored was Le Labo, for the first time really, as I've never been any near their retail store since my visit to Blunda in West Hollywood, and at that time I was too busy with the Hanami perfume exhibition to make it down there. I liked what they did with some of the scents Iris 39, Pathcouli 24, Oud 27, Labdanum 18 were the easily most memorable, which shouldn't be a surprise as I love these notes; and believe it or not - their Calone room spray also left a positive impression on me, though I doubt I'll ever buy or use it - it was certainly intriguing. But the highlight of the counter for me was the opportunity to blind test myself with some 45 or so raw aromatics (most of them natural). The bottles are lined up in a little silver case, and only numbered, not labeled. Thanks to Jonatha, the helpful rep at the Le Labo counter, he told me if I was right or wrong. Le Labo Olfactionary close-up, a photo by Nathan Branch on Flickr.
I get very little chance to test my nose like I do to my students (the only times when I truly was able to get "blind tested" was when I went to a week long course in Grasse, France), so it was a fun and internesting experiment (and also quite a relief that I got most of them right). The ones I didn't guess right among the naturals I'm familiar were a little "off" from sitting in the alcoholic solution in a bottle for too long, or were just such different specimens from what I work with that I had no clue. Even after getting the right answer they still didn't smell like I know them... the three I didn't guess right were their frankincense, which smelled very much like oregano (!) in the top; the oakmoss, which was nothing like the green oakmoss - or even the brown oakmoss I work with (it was kind of inky, vaguly animalic and woody, but without any of the distinct characteristis, which is why it smelled very "off" to me), and it only revealed its mossiness after sitting on a scent strip for a good 10 mintues or so, and the cedarwood smelled neither like Virginian nor Atlas or Himalayan cedar - but like guiacwood... In either case, it was a good lesson in using scent strips when blind testing, because even if you are smelling different specimens than what you're used to, some of the characteristics that are familir and universal to the particular raw material should reveal themselves at some point in the dryout phases.

I also re-smelled a few of The Different Company's scents, and a few of their new ones, got a sample of A Portrait of a Lady from Editions de Parfums which I'm looking forward to trying on my skin (smells very much like a big "saffron and rose" perfume), and left with one wrist adorned with Yosh's Ginger Ciao (which I remembered spicier and less floral that it is now); and the other with Kismet (quite narcissus-smelling on me, dark an exotic), and that's how I smelled for the remainder of the day in San Francisco!
Back to the top