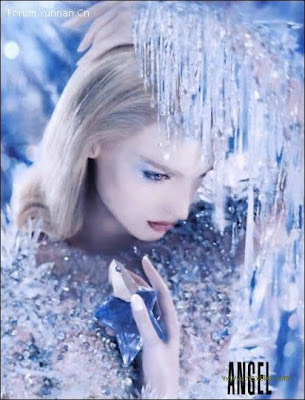 I’ve been postponing for years reviewing Angel – because it is not only such a huge commercial hit and an icon with a huge cult following; but also because of its divisive nature. People either love it with a passion, or hate it with just an equal amount of gusto.

Reading through previous notes I made in attempts to describe it might shed some light on my own ambivalence towards it. But first – some background information about how I met Angel. It was introduced to me by a perfume-loving friend. She had blue streaks in her jet-black hair, and the sweet-tooth equivalent in perfume taste. It was at the time when I began going crazy for perfume myself, and I was mostly dousing myself with heavy Orientals: there was not a day without either Shalimar or Samsara, and I craved those perfumed sweets with an ongoing hunger. Angel should have fit right there with all that yumminess; except that it was – well; too much. And although I enjoyed the unsolicited compliments about how good I smelled (from people about 5 meters away from my vicinity) - Angel was one of those rare perfumes I had to return to the store because it did cause me headache at the time, not to mention would never leave my coat’s sleeves, forever clashing with the next day’s scent.

So here are some previoius thoughts on the subject of Angel:

“If you want to be possessed by an angel put some of Thierry Mugler's first fragrance on. It will occupy all the olfactory space around you and leave a visibly blue trail of synthetic chocolate scent behind you. Deliciously sweet chocolate, caramel and honey are strangely balanced by less appetizing notes of patchouli and watery, slightly musty helonial. Most recommended for those on extreme carb-free diet”.

“Angel is the proof that too much of a good thing can indeed be quite bad. Chocolate, honey and caramel – who would have thought that these could be worn as a deadly weapon?”

“This cutting edge, trend setting Gourmand should be praised for its originality, but not for subtlety or finesse. It’s easy to cross the line – it takes only a few misty droplets from the with a fraction of a spritz - between mouthwatering, naïve sweet tooth seduction to a repulsive blue chemical acid – reeking of patchouli in doses that can cause an eating disorder*.

*Patchouli is known for its effect on the appetite and is used in aromatherapy to control and regulate it. Over exposure to patchouli can cause nausea and pathological lack of appetite. 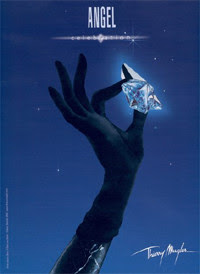 To try Angel anew after many years of feeling about it as the above feelings of “it’s too much” requires much open-mindedness, which apparently I’m not short of. And so the opportunity arose just a few days ago.

It was a warm evening at the beach, and a friend brought me a little sample to try (a token from a faux-admirer of hers, which is another story altogether…). I felt compelled to give it another try, and with the comfort of knowing I can always tone it down in saltwater I gave my right writs a spritz, and rubbed this on to my left one. To use any other word but “sweet” is impossible to describe the opening: a mixture of cotton candy, honey nougat and caramel is what I would have experienced for a while; with only slight floral hints of anisaldehyde, and spacious helional that imparts an ozone-like character. There is something oddly clean underneath it all though, which balances the sweetness in a quite surprising way, as well as a barely-there acid blackberry accord and a hit of bergamot. Crystalline amber accord, with a certain clean woody aspect to it. And there’s also the marzipan, buttery-powdery sweetness of coumarin to anchor that floralcy and spiciness from the anisaldehyde.

And then comes patchouli; which is the redeeming point of this otherwise overtly sugary-sweet concoction. Patchouli that you would smell on your skin for hours and hours – soft, musky, seductive. Real patchouli, thank goodness. So, ladies – and gentlemen – if you wish to try this scent, I recommend you use the lightest of hand (one dab will suffice to perfume your entire aura so do not go overboard!).

It is not till now that I can see references and suggestions towards non other than the grand Shalimar – as if this was a modern homage to this overt luxury: ethyl maltol takes vanillin’s place on the synthetics front; and patchouli creates a contrast and a balance similar to what the leather and castoreum note did in Shalimar, and tonka bean is replaced completely by synthetic coumarin. And it also does not feel nearly as linear as before (though it is still rather linear), with some notes (honey, anisaldehyde for instance) appearing in the beginning and quickly dissipating (mostly into pathcouli, coumarin and ethyl maltol). And in both, bergamot plays a big role balancing the sweetness of the base and core. Interestingly, although it is often touted as a “patchouli and chocolate perfume”, it is well-known industry “secret” that it’s mostly about ethyl maltol (aka Veltol) and patchouli, and although the chocolate impression was requested by Thierry Mugler in the brief, there is no actual cacao or chocolate accord in the formulae…

Love Angel or hate it – one thing is for certain: Since its conception in 1992 (by perfumers Olivier Cresp and Yves de Chiris), Angel has changed the modern world of perfume, and in particular the Gourmand genre more than any other perfume. There is no distinct floral note in Angel (unless you have a very well-trained nose to notice some of the floral nuances), and it relies heavily on food-like elements. After Angel came many sensational gourmand perfumes such as Lolita Lempicka and Yohji, as well as the masculine versions of all three. And less sensational fragrances that took the gourmand and patchouli into various direction – from the more adventurous – albeit sickening - aquatic & fruit patchouli mess (as in Coco Mademoiselle and many of her other copycats) to fruity and candy-like gourmands that are endorsed by every other celebrity on the planet.

You can also read more insights into Angel’s significance in Bois de Jasmin’s excellent article on the subject.