Slightly charred vinyl flowers on sand and rubber tires abandoned in the heat of the summer and splashed over by salty sea water. If you were lucky, it would cling to your clothes the way ozone does after coming in after a brisk walk in the chilly air. There’s a wind blowing and it brings forth the scent of desert flowers (is it broom ?) and perhaps even beach lilies, mingled with grassy shrubs and metal frames that were left behind and are now blooming with deep-red rust.

Dune is not often discussed or mentioned among pefumistas. I can’t think of a single person I know that loves or wears this scent. And it’s one of those cerebral, and slightly moody scents, which I was never able to connect with, but always admired for its role in the history of contemporary perfumery.

Launched in 1991, Dune has impact beyond what meets the surface. It was one of (if not the first) modern perfume to disregard the “pyramid” structure of beginning, middle and end (also known as head/top, heart/middle and foundation/base). Instead, it takes a completely linear path that fades into the horizon like a curved mass of sand.

Jean-Louis Sieuzac, Nejla Bsiri-Barbir and Dominique Ropion created Dune in 1992, and in 1993 it won FiFi awards. It is a scent that had an immense impact on perfume culture throughout the 90’s, though not too many are aware of that ozone/marine scent. If l’Eau d’Issey and Cool Water began the trend of transferring aquatics from the pool to the bottle (Aquatic/Watery Florals and Fougeres); Dune was more about the open space near the seashore, and explored the concept of “ozone” or the scent that is in the air around the ocean. It was well ahead of its time, and as it turned out - it is the father of all the "mineral" or "salty" scents that are slowly but surely gaining momentum in the new millennium.

It might have taken a while, but Dune to me is a scent that explores the movement of a vast body such as a sand dune. It comes in as a wave and fades out as one. A year later came another perfume that questioned the authority of the pyramid structure: Angel, with its linear, homogenous yet aggressive personality. But while Angel took the spirit of the 80’s and amplified it ten fold to push strong-minded fragrances to the next generation; Dune was all about refinement and subtlety, and inspired other perfumes with similar character.

In its time, Dune resembled no other scent - so much so, that it took me literally years to be able to wrap my head around it. It was so cerebral and I had difficult time connecting to it, “reading” it. It did not really “speak” to me with its very unnatural, sci-fi personality and abstract raw materials… In the meantime, Dune has influenced many similar scents – linear, woodsy and warm yet clean and cerebral: Tocade (1994), which is about as linear as any scent could ever get; Allure (1996), which supposedly has the “faceted” structure, but if you look at it closely feels and smells very much like a copycat of Dune (even the “facets” which are just different aspects of this one linear processions – are dominated by the same notes: Mandarin, Vetiver, Vanilla, with the white flowers being the only visible variant); and lastly – the salty ambergris-centred Eau de Mervelleis (2004), Bois d’Orage (2007), Dans tes Bras (2008) and Terre Hermès (2009).

So now after exploring these scents and observing its influence, coming back to Dune seems on one had to finally make sense; but in the other hand – lost a bit of its novelty for me. 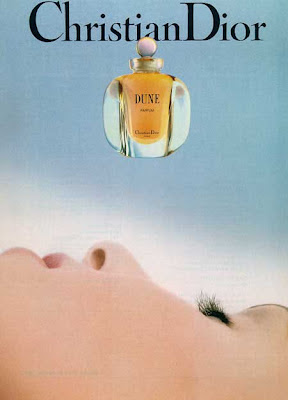 Dune by default fits in my gestalt with the Frank Herbert’s sci-fi novel bearing the same name. And just like that novel, which walks between modern mythology and political commentary – Dune questioned our paradigm of how perfume should behave, and at the same time has become such an iconic perfume on several levels: the choice of raw materials (and the inclusion of helionial to create very realistic ocean-side nuances), the linear structure linear as linear could be – as and far as I know the first of its kind (followed only a year later by another modern icon – Angel).

Even the bottle is brilliant – reflecting the curvature of the dunes, their pale golden and glowing colour, at the same time flowing yet set in its own ways – just like the jus within it.

Dune is singular, unusual and very out of the way from my comfort zone or natural leaning. Although it is, as mentioned and emphasized earlier about 10 times, a linear scent – there is a certain progression, and in the beginning you would smell pale, transparent hit of green abstract notes, which are mingled with mandarin and resemble citrus leaves (only cleaner and not in the least eau-de-cologne like). Fairly quickly these just fade to become part of the greater picture – abstract flowers, sand and mineral notes mingled with salty air (yet not in the least algae-like) and revealing slowly an undercurrent of vetiver, amber, musky woods and vanilla. And it also lasts and lasts and lasts – easily for 10 or 12 hours; though not in a menacing or overpowering way. It’s just present.

And if you really "need" to see more specific notes of succession of Dune's aspects, you might like this part (the flowers are very unoticeable though, in my humble opinion):