Home / SmellyBlog / Who Needs a Boyfriend?! 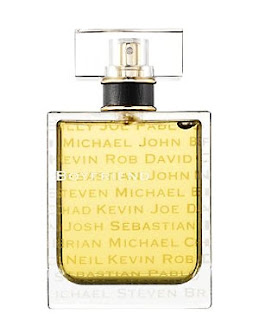 When Boyfriend perfume came out, the story behind it as I recall was that Kate Walsh (not sure who she is - Comedian? Actress? Singer? All of the above?) longed for a long gone boyfriend's smell and thus created a perfume that will remind her of the shirt he leaves behind.

It's comforting to know that not only I sniff old boyfriend's sweaters (blush); and also, unlike the endless possibilities of cheesy videos that a perfume with such name could have rendered - I think it has a brilliant marketing campaign: It walks the tightrope of being nostalgic and emotional to a fault yet laughs at oneself while at it. Which is a healthy balance when delving into the dangerous world of romance. Even the packaging is well done - the bottle, engraved with a long list of popular Anglo-Saxone names (if you haven't dated them all, please circle the one that best applies). The only thing they overlooked in that regard is a big red marker to circle around the boyf's name/s that apply to you... I suppose I will have to source mine elsewhere.  But either way - the bottom line is that the whole campaign made me have a good laugh. Which is most welcome when it comes to the most "serious" matters of the heart...

I guess all in all, I was the perfect target for this product: endlessly single gal in her 30's, career oriented, pretty hopeless when it comes to romance, and pathetically smelling old boyfriend's t-shirt when nobody's watching... Well, mine has gone stale long ago. I was so worried that the perfume will disappoint me that it took me another year to come closer to it (responding with a big smiling recoil at the daring dose of patchouli). And remembering that, I had to come back for a real try this week to complete my patchouli series.

Boyfriend begins with a robust fruity notes of dark plum, underscored with massive amounts of resinous benzoin - a sheer foundation for the most popular amber personality of the decade - "crystalline amber"*, whose sweetness can only be forgiven as it's anchored in a woody, dry, musky notes: bitter myrrh, reminiscent of the tears of sacrificial love that every woman worth her salt has put into a relationship only to find out that yet again, it isn't working; patchouli, to reminisce after his patchouli-lade Eau Sauvage aftershave (I'm just making things up... If I met a man who uses Eau Sauvage aftershave I would be single no more!). Vanilla kicks in shortly after the myrrh, but it's rather full-bodied and thick, bringing to mind real vanilla extract with a powdery heliotropin finish.

And lastly, Boyfriend dries into a clean patchouli and musk cocktail, that is not too uncommon for present day, but quite nicely done - a clean skin scent that is not unlike Pure Turquoise, though with a much warmer beginnings.

Boyfriend is surprisingly well-done, not just in comparison to other celebrity scents, but even just as it is. It's refreshing to see a celebrity taking her scent so seriously and bringing so much humour to a rather sore subject - kudos to her! Please don't kill it with meaningless flankers! (too late...?).

*Crystalline amber is the kind that is light on the sweet resinous animalic aspects of labdanum, rendering its amberiness from fraction distillation of labdanum, which are more transparent, woody and clear in colour as well - plus some synthetics that I won't get into right now)
Back to the top