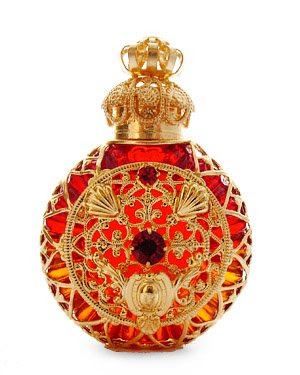 My thoughts this Halloween are with the Eastern Seaboard where so many of my customers and fellow perfumers live. After all the excitement for the 3-night Clarimonde masquarade at MiN New York, it is a dramatic contrast to have such turmoil only a few days later. I can only hope that all the people there are safe and warm and from what I gather there is a lot of community effort and people helping each other manage through this very devastating storm. 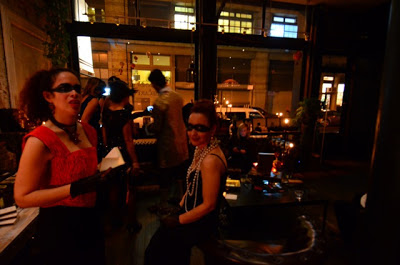 Life is so tumultuous, and as much as sometimes we'd just want to rest - it is that movement, even at times of violent chaos, that distinguishes it from death. At least in it's romantic perception... While life is ever changing and unstable, death is that one sure thing, the resolution and rest to all. Immortal and glorious, eternal slumber. Silence.

Immortal Mine was created by House of Cherry Bomb - the baby of two New York based perfumers and artists: Maria McElroy (Aroma M) and Alexis Karl (Scent by Alexis). It takes the Goth theme to the extreme with a very rich, oil-based parfum that's bordering on being too much of a good thing. It is reminiscent of hot wax of red candles extinguished by pinch of two fingers and their slightly burnt skin and suffocated wick; dirty oud and sweet, nearly cloying immortelle melded with amber and molten chocolate. It is quite resinous, thick and sweet, yet there is some smoke and vetiver, burning myrrh and frankincense to penetrate through one's consciousness and create a reaction - regardless if this is your taste or not. There is also a tinge of indolic jasmine, and musk for good measure that diffuses and softens it a bit. It ends on a note of agarwood and decaying honey. Still peculiarly cloying, resembling the decomposing corpses, not far off what I would imagine the Corpse Bride would sprinkle on her wrapping sheet in her half-dead wedding.

The authors describe it well:
"Immortal Mine is the soil from an unmarked grave. One single drop of blood from a slayed Wyvern, the sweet elixir of dying jasmine and fading neroli. Amber found in ancient tombs of civilizations lost. Longing. Essence of smoke from the funeral pyre. A cut of material from Bela Lugosi’s cape, the dust from a bat’s wing. Wood resins gathered from the Forest of The Dead, Myrrh scraped from the cliffs of The Dark Realm. Precious ouds unearthed from burning desert sands. Wax dripping from black, white and pink candles, ashes of a Phoenix, words from a dead poets mouth. Rare herbs found in a cathedral’s forgotten garden. Desire".

Immortal Mine can be found on Indiescents and Suendhaft, where it is bottled in a beautiful filigreed mouthblown Bohemian glass bottle.  This week, I'm giving away my "copy" of the roll-on, given to me by the perfumers themselves. And I'm sending back prayers for minimal damage from the storm and returning back to normal life as soon as possible on the East Coast!

All you have to do is leave a comment telling us what your Halloween perfume was, and why you picked it (if such explanation exists). We will do a random lucky draw on Friday. Immortal Mine, a photo by Ayala Moriel on Flickr.