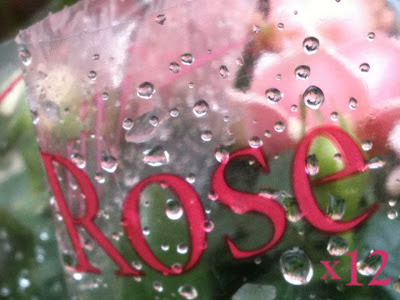 In the last few months, I find myself constantly reaching for roses. Be it fresh, simple rosy body products, rice milk pudding with rosewater and orange flower water (otherwise known as malabi), rose chai, or full-blown romantic and mysterious rosy perfumes - I'm there. And with Valentine's Day a mere couple of month away when all this rose obsession took possession of me - I've decided to invite a few of my perfume blogging friends over for a big, rosy blogfest!

1. Parfum Sacré was the first Caron that I fell for. And hard did I fall. It stroke a deep chord with me, the way only really great perfume can do. That feeling of familiarity and magic; a lost memory not only being retrieved but being re-lived. In this case, my first perfume of all times, coinsiding with my first true love: Abishag (made by the Israeli Museum in Jerusalem, and shortly after its introduction was discontinued). Parfum Sacré  got nothing in common with the latter's green top notes, but a very similar base and dry down. It's surprising that something so luxurious came out of a very sparse period as the 1990's. It has all the characteristics of days of yore, when no one ever suspected that musk ketone might someday become illegal...

2. Nuit de Noel, also by Caron (but from a much earlier period when its founding perfumer was still alive) has all the makings of a great love story: beautiful pitch-black bottle, the enigmatic Mousse de Saxe accord which relied on isobutyl quinoline - one of the very first man-invented synthetics (aka: not naturally occurring); and more importantly: the innovation and genius of Ernest Daltroff coupled with the love of his life, Félicie Vanpouille, whose fondness of Christmas Eve is told to be the inspiration for this perfume. But what I find most inspiring is how dedicated was this couple (who never married, despite Daltroff's repeated proposals) to the art of modern perfumery in the West, which they pioneered. From the perfume design itself, where Daltroff incorporated bold, uncommon, innovative, and often difficult to work with raw materials - to the bottle and box design - these two worked together to create what I feel was authentic multi-media pieces of art. Nuit de noel is one rose that will I will always keep in its ink bottle on my desk: If I were to ever write a love letter this would be my ink.

3. Tocade  by Maurice Roucel for Rochas is a flirty, easy to wear but not as easy to forget scent. The delicacy of roses is played up here with notes of magnolia (Roucel's signature note, reappearing in many of his creations). It has such a distinct, recognizable character that is the definition of a good perfume. And it's one of the first linear compositions, abandoning the serious evolution from top to base through heart for a structure that is more in line with the fast paced modern lifestyle; yet without compromising innovation and originality. There's a lot to learn from Tocade!

4. Agent Provocateur was one of those intriguing scents - a little too much of everything. Yet somehow it just works: saffron, rose and musk - all in large doses, and although this might sound "oriental" or even with an Arabian theme - the result if one of the early Pink Chypres, also known as the hard-to-believe phenomenon "The Moss Who Wasn't There". Well, while I find such a notion to be sacrilege - perfumes such as Agent Provocateur, that do it well, do deserve respect. The musk teams up with dry, woodsy vetiver and sweaty coriander to create a bombshell, Femme Fatale fragrance that  should be reserved for special occasions (example: blogging about Valentine's Day perfumes, or something more risque if you live outside the computer).

5. Kashmir Rose Whipped Body Butter by Velvet & Sweet Pea’s Purrfumery is just like they say - you have to feel it to believe it. It's like dessert for your skin. And with only the best things on earth: virgin coconut oil, cocoa and shea butters, and, of course - pure rose essence from Kashmir. Just goes to show you that mother nature does not need a lot of help to be amazing and nourishing.

6. Bedouin by Persephenie is a simple, elegant, pure rose - with a twist. But of course! Otherwise I wouldn't love it so much. And that twist is cardamom, and botanical musk from ambrette seeds. Bedouin smells luscious, fruity almost, distinctively rosy yet not nearly as boring or sharp as so many rose soliflores tend to be. "Not your garden variety", as they say...  Another great example for how simpler feels more luxurious.

7. Royal Couple candle Gabriel’s Aunt is as good as it gets. And it's true, it's not all roses - there's jasmine too! Nevertheless, when it comes to candles, this is about as rosy as you can find. And like everything that Nikki Sherritt makes - it's all natural, and made with love. If someone were to turn Joy into a candle, this is how it would have smelled.

8. Rose Bohème by Providence Perfume Co. improves on the theme of spicy rose patchouli oriental to the point that it's really hard to say anything more than that. The key here is not just using top quality naturals (we already know that's important, right?) - but also the balancing act of making fussy notes such as rose yield to the uncompromising personality of patchouli. And to make this balancing performance even more impressive - there is also exotic saffron and stubborn cloves. Classic spicy oriental at its best.

9. Rose Paka by Persephenie is hands down the best face cream imaginable. And I say so not just because Persephenie is my friend - but because I am very picky when it comes to any products that go on my face. And they most preferably would smell of roses. Rose Paka isn't just wonderfully rosy, and redolent of white chocolate (blame it on the cocoa butter) - but it also is nourishing without being greasy; fast absorbing without being useless. I rarely re-purchase creams, as I usually find one flaw or another in them, and easily develop sensitivities around my eye areas. But this is an exception. And what's even better - it doubles as a body moisturizer, which makes travel easier!

10. I did not expect to like Rosewater & Vanilla by Jo Malone. Nor did I expect for it to remind me of anything I'm familiar with. And definitely not to smell Middle Eastern. But it did remind me of malabi - that sickening, chilled dessert that is served with red grenadine syrup. But it made it smell all nostalgic, and actually very pretty. It's nice to discover new loves from time to time. And this is the only one in the "Cologne Intense" series that did not smell like it's trying too hard to smell "niche".

11. Ta'if by Ormonde Jayne  is a Middle Eastern fantasy from a British perspective. And like all things good and British, it somehow involves floral prints - or gardens. In this case, the noble petals are embroidered with spice and desert fruit: saffron, pink pepper and dates. Somehow along the way - after you hit the drydown, you realize it's a happy medium between Parfum Sacré's spiciness and Tocade's powdery musky sweetness.

12. Qajar Rose by Parfums Lalun gets a notable mention for authenticity in a world that seems to have a lot of wannabes. Perfumer Maggie Mahboubian was born in Iran, and she sourced Persian roses to include in this lovely, mysterious spicy perfume, alongside saffron, cacao, coffee and wine-like fruity notes of pomegranate, strawberry furanone, davana and geranium. Parfums Lalun is an intriguing new line, inspired by Maggie Mahboubian's passion for creating her own natural beauty and cosmetic products - a tradition that was alive in Iran when she was growing up. I hope she continues to do what she does and inspires other women to live beautifully!

Now, I was going to share with you my new recipe for rosewater buttercream sandwich cookies which I served at my Broken Hearts Tea Party (aka my 4th Annual Valentine's Day Afternoon Tea); but I've already picked my dozen roses, so this will have to wait for another post, tomorrow. In the meantime, please scroll over to my perfume blogger friends, and get more rosy inspiration - and don't forget to leave comments with your favourite roses!