Candy Bracelet, a photo by Macrografiks on Flickr.
I remember the dramatic moment, when I discovered that my toddler daughter can recognize flavour (and therefore, scent). She was eating one of those candy bracelets as pictured above, and after chewing the yellow one, exclaimed: "Banana". In my days, the yellow ones were lemon flavoured. But after tasting one myself - I realized she was right, and the yellow was, indeed, banana flavoured.

How interesting, that a child who could barely learn words or symbols can associate such a plastic-like aroma and chalky-texture of "banana" with the real thing (for those of you who don't know me quite well, my daughter has autism, a neurological disorder which affects all areas of life, but first and foremost - language and socialization). I was amazed, puzzled and more than little curious... My first personal encounter with the olfactro-gastronomic "banana" as an abstract (and, let's face it, fake) concept of the true fruit was on the beached of Bat Yam (a suburb of Tel Aviv), around the age of 3. It looked exactly like the ice cream bar in the above photo, and tasted about as remote from the real thing as possible. If anything, it perhaps was somewhat similar to baked bananas. But not really... All the same, I loved its creamy texture, cool frozen cream in faux-chocolate coating that crumbled under one's teeth in an instant. If you haven't tasted this before, try to get a hold of Comptoir Sud Pacifique's Vanille Banane, which is like a wild ride at the country fair, holding very little grasp in reality... 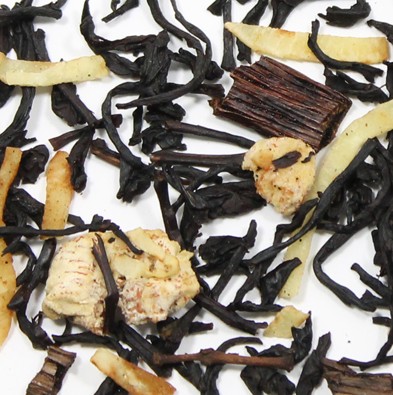 This banana flavouring trend persevered in the flavour world for decades, with more modern variations being only slightly more sophisticated, for example - Ben & Jerry's Chunky Monkey ice cream, which is based on the aroma of banana bread, with the addition of crunchy walnuts and gritty frozen chocolate shavings, for added interest. More recently, my daughter and I have become addicted to Murchie's Coconut Cream Banana flavoured black tea. It's a wonderful affair of deep and smooth black tea, paired with freshly baked banana bread spiced with allspice and real banana slices and coconut ribbons. It's especially soothing with a tad of milk added, and more often than never, we go overboard with a slice of banana bread right next to it. 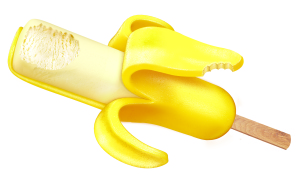 This summer,  however, a new trend of bananas have rised to my palate's concious: the under-ripe raw banana, preferably with the peel. It first made an appearance in our lives at Second Beach Concession, which sold Peelin' Pops - Nestle's relatively new frozen desserts invention (which actually first showed up in Thailand in 2011...). This strangely innovative little bar is tiny but impressive: a modest amount of vanilla ice cream is covered with a thin layer of semi-frozen gel, not particularly sweet, and only charmingly slimy, which possesses an alarmingly realistic flavour of under-ripe banana. The experience of biting into the top of such pop and peeling off the "banana peel" is imaginative and addictive and I'm surprised not to have found it in more places. 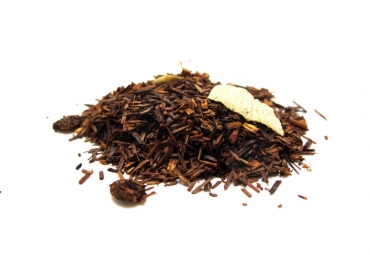 Just a couple of weeks after the discovery of banana peel as a gourmet phenomenon we meet another strange banana tea: This time it's Red Banana from Banana Republic - one of my favourite tea shops in town. This rooibos tisane is again adorned with generous coconut ribbons, and flavoured also with banana and kiwi pieces. However, the banana has nothing at all with the ice cream merchants on the beaches of Tel Aviv, nor baked banana breads: it resembles the raw, not quite ripe yet banana, with peel and all. Seep that in boiling water, and the tea is smooth yet refreshing, fantastic as an iced tea as well, and tastes convincingly natural. It's lovely with milk - or without. Now I'm just waiting to find a matching avant guarde dessert to match it, because banana bread is too spicy and not edgy enough for this cup of tea... Perhaps a raw banana cream pie? Or slices of frozen banana served with a drizzle of coconut milk?
Back to the top