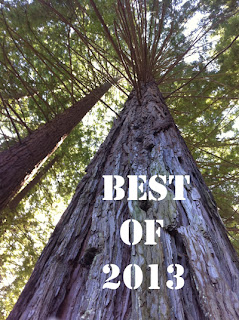 This year has been a strange one for me; but considering that last year I didn't even get around to putting together an end-of-year summary, I guess all's well that ends well...

I've been leafing through my entire year of blogging last night, trying to gain an outside perspective on my creative olfactory life, and my conclusion is: 2013 was the year of the forest! I've spent more time than usual (though still not enough) in the woods, finding inspiration in the scents as well as the resilience and grounded stability of the thriving trees.

Decidedly I was not going to launch any new perfume in 2013. It was a year when I would concentrate on maintaining what I have and strengthen my brand. This year I've launched the new packaging and still am transitioning my entire line to "get there". As the year comes to a close, I'm almost there...

And a few things that were set to be done in 2013 were not accomplished, sadly (the main thing being my 3rd edition of the Foundation of Natural Perfumery book, to be published both digitally and as a printed-in-Vancouver paperback). However, bearing in mind that I spent a lot of the year in a displaced state (aka 3 months of travel) or looking up (a more positive way to describe my 4.5 months of taken hostage by back-pain et al and only able to see what's up in the sky or the ceiling). Both of which profoundly restricted my abilities, but haven't quite broken my spirit as it turns out. So, all considered, I was actually surprised at how much I managed to still accomplish in writing, creating and discovering new perfumes (well, at least new to me!).

Another important project for me was to relaunch my line of teas, which was out of production for several years due to supplier changes. The teas used to be made for me by another company in Vancouver that went out of business. So I had to reformulate 2 of the teas, and find suppliers for high quality ingredients (considering each tea is made of about 5 ingredients, and not all can be found via one supplier alone - this was a bigger undertaking and took several years to establish). And I had been set back 5 months due to the reasons above - but was able to catch up with it all this fall when I returned from a prolonged trip to Israel. So, I'm happy to have finally brought this to completion and have the full line, with new packaging and labeling set and ready for you all to enjoy before the close of the year!

Well, that was a very long prelude to a rather short list of the fragrant moments that made my year. Some of which were neatly bottled in vintage flacons, carefully decanted by fellow perfumistas, or encountered in less traditionally perfumey manners, relating to the culinary worlds of tea, wine, beer and pastries. My philosophy is that connecting to your senses is more than just a hedonistic way to indulge in the best of life's pleasures; but also a way to reconnect to the here and now, and make that link between mind, body and soul stronger and felt throughout the day.

Surprise of the Year: Russian Perfumery
I've been fortunate to have received many beautiful gifts of fragrance this year from Russia. SmellBlog's reader Muza (Anastasia from Muza Perfumista) has generously sent me many beautiful samples of Russian perfumes by Novaya Zarya and indie natural perfumer Anna Zworkyina Perfumes. I've fell head over heels with the boehmian-chic of Patchouli Magique, and also made a new perfumer-pen-pal-friend with Anna Zworkyina, who have sent me many more of her exceptional creations.

New Indie Perfumer: Bruno Fazzolari
I first met Bruno 2 or 3 years ago at Yosh's. He introduced himself as an artists and instructor at San Francisco Art Institute, who surprisingly was also teaching his students about the art of olfaction. Some 2 years later, he launched his own eponymous line at the 2nd Artisan Fragrance Salon in San Francisco - to which I received a little sniff-preview when Bruno helped me prepare for the perfumers' afternoon tea. Bruno Fazzolari's fine art references and how the perfume ties in with his paintings and exhibitions is nothing short of fascinating. It's abstract, yet approachable. Surprising and at the same time easy to wear. The mineral, sheer yet dark quality of Lampblack is intriguing; and Au Delà is a unique modern interpretation of Chypre.

Vintage Treasure: Crêpe de Chine
Counting my blessings this year, this vintage bottle that came to me from Amsterdam via a Basenotes swap was the most important perfume event of the year. Any perfumer who hasn't smelled Crêpe de Chine yet should do so at their earliest convenience. It's a masterpiece and in my opinion a better point of reference to what a Chypre should be (or used to be) than anything else, including Coty's Chypre.

Most Exotic Indulgence: My Vanilla by Anna Zworkyina
Remarkable play on vanilla absolute, showcasing its perfumey quality rather than the pastry associations it often ignites. My Vanilla is paired with champaca and several smoky, woodsy and musky notes that are a personal departure from the cliche vanilla treatment.

Most Beautiful Floral: Osmanthus Oolong
Another quite exotic indulgence, is this utterly gorgeous osmanthus perfume from all-natural indie house Providence Perfume. Charna Ethier is a talented composer of complex yet bold perfumes, and this one has captured my skin for quite sometime. I love her use of tinctured fruit, which adds depth and a realistic sweetness. If you know my love for osmanthus and oolong teas, you won't be surprised that this is "my cup of tea".

Cheap & Chic: Patchouli Magique
Even if you don't receive it as a gift from generous perfumistas in Russia, you can enjoy this chic, bohemian patchouli and musk fragrance without breaking the bank via some online retailers that specialize in Russian perfumes. And yet, it smells nothing cheap at all, but rather like a paisley shawl deliberately flavoured with patchouli leaves to protect it from hungry moth.

Obsession of the Year: Anima Dulcis
It was released 2 years ago, but it's complete news to me. I found it on my downhill trip to Barneys in San Francisco, and fell instantly in love. Why I didn't get it right then and there remains a complete mystery to me, for which I'm still paying dearly.

Best Impulsive Purchase: Égoïste
Contrary to Anima Dulcis, I didn't waste my time when I approached Égoïste in Schiphol airport. I snwatched it right away (on my way back). These types of decisions may seem impulsive but are in fact well informed. I was absolutely sure I can't get it in Canada. Which was not the case for Anima Dulcis (as it turns out, the latter can in fact be found in Holt Renfrew in Toronto and in Etiket in Montreal - so not all is lost).

Favourite Mainstream Discovery: La Petite Robe Noir
I know it's from last year, technically; and I'm yet to review this, but it's not nearly as sugary sweet and mainstream as it appears to be. It's got a lot more substance to it than I've expected from such a fashion-y name. It goes straight into my to-reveiw-list; and I'm also curious about the extrait (and might as well get a bottle of it, "unsniffed").

Favourite Niche Launch: Volutes
It's not a masterpiece, and I'm still not even sure if it's FBW - but I really did enjoy it and was happy that Diptyque finally launched something a little less lightweight.


Most Nostalgic Find: Abishag
I'm so happy I found you!
'Nuff said.

Greatest Disappointment of 2013: Epice Marine
I had high hopes for this one. In fact I still do. But why did the Hermes boutique in Vancouver did not get it yet?! That is where my disappointment lays...

Note of the Year: Sandalwood
With the dwindling plantations of sandalwood everywhere, this note has become even more precious than before. The article covering sandalwood is also bringing to a close pretty much everything I had in mind for my Decoding Obscure Notes series on SmellyBlog. Now I can finally finish my book, for realz...

Fragrant Pastry of the Year: Rahat Loukum Cookies
Inspired by Orna & Ella's cookbook, I've made their cookies, but have decided to improve on them by using a classic French recipe for pate sucree as the dough encasing these little rosewater jellies. The result is sublime (and recipe will be published on SmellyBlog later this holiday season).

Craft Beer & Coffee:
Two months of torture in Israeli summer would convince you to drink anything with even the slight suggestion if not promise of relief from the high heat. For me, this summer was the turning point for embracing these two bitter beverages: Coffee and beer. Every afternoon, at 4 o'clock or so, when the heat has accumulated to an unbearable level and we've all reached a point of exhaustion and irritability - my sister in law and I would indulge in an iced coffee. Nevermind that we would have hard time falling asleep after - it was worth it. And with her Italian heritage, of course it was espresso, made in a stove-top machinetta (aka Bialetti's Moka Express machine). I've become so smitten with coffee that upon my return to Vancouver in September, I purchased a Moka machine for myself (which I nicknamed "The Fountain of Youth"), and am already running low on the half pound of ground beans I've gotten on the same day (which means I'm actually using that moka machine, not just using it for decoration...).

The other bitter beverage is beer, which is surprisingly delicious when it's so bitterly hot and unbearable. But also quite spectacular in any weather, if it's a good beer. For my new fascination with Craft Beers I can blame Rachel Sawatzky of CocoaNymph, who runs Craft Beer & chocolate pairing nights once or twice a year at her chocolate boutique in Point Grey. My favourite craft beers so far were a wheat based pumpkin & pear, as well as a grapefruit one from Germany; and the seasonal blackberry beer "Black Betty".

Favourite Tea: Pure Black
This year I've been mostly sipping the full-bodied and fruity (baked apple, perhaps) Cask Aged Ghorka and the violetty, delicately floral Darjeeling - unadorned, unscented black teas, both feeling like pure luxury and a great boost of energy at the start of my day.

Best Scent Event I've Ever Hosted: Perfumers' Afternoon Tea in Berkeley
It was the biggest production I've ever done, perhaps because it was done out of town, in a space I've never seen before, and was a big leap of faith as I never met the co-hosts that graciously allowed me to use their space at Alembqiue. But it all worked out. It was one of the greatest adventures I've ever embarked on, and it all fell into place beautifully, including some compromises and inevitable last minute changes to the menu or otherwise. It was a test to my concept of traveling with my daughter and hosting teas in various random places along the way. I don't know if I'll ever be able to do it again - but I am so glad I did. It was my dream come true!

And on that note, I'd like to end my very short and in-exhaustive "best of" list: wishing you a happy, fulfilling new year in 2014 - and may all your dreams come true as well!

What perfumes made your year 2013? Any other fragrant or olfactory related discoveries you've made? Please do leave a comment, and enter to win one of 3 draw for a bunch of niche and indie decants and samples, including Tom Ford, Chanel's Les Exclusifs, Hermessences, Neil Morris, Oliver & Co. and Ineke.
Due to repeat draws for the same readers, those who already won contests or giveaways on SmellyBlog will not be entered into the draw. But please do leave a comment :-)
Back to the top