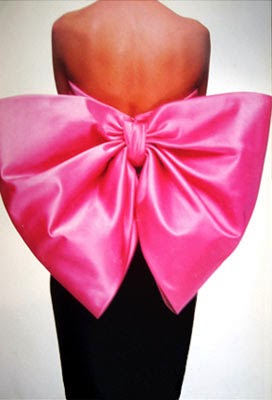 In preparation for Purim, I started thinking a bit about the connection between perfume and costume. I've discussed before how wearing a perfume can carry the same power and purpose of wearing a mask. This topic can be approached from different angles though: the similar angle of "wearing" perfume as you wear a garment, to present yourself to the world via an olfactory image. Such a picking the perfume equivalent of a navy or grey suit for a job interview (No. 19, Grey Flannel) versus a red one (the perfume equivalent of which could be Giorgio); picking a floral dress for a  or jeans and pearls for Sunday brunch or a picnic in the garden with your in-laws (wearing AnaisAnais, YSL Paris, or Laura Ashley No. 1). The other aspect is the elaborate costumes designed for perfume commercials, designer fragrances most likely. Thierry Mugler has gone through elaborate lengths to design a different haute-couture gown for each of his Angel campaigns, all of which completely impractical for wearing in real life (even in a very fancy ball or red carpet event). One, for instance, was made entirely of heavy crystals (meant, no doubt, to hold the waif model down so she does not fly off the tower where it was shot). Nevertheless, Thierry Mugler carried his Angel dream all the way to reality in the most admirable over-the-top-manner only an artistically obsessed personality would.

YSL's famous dress for his Paris perfume: a black velvet gown with a pink satin haltertop that gathers into an impossibly enormous pink bow at the back - just as likely as the acrobatic lover who would smell your perfume miles away, only to drop out of thin air from a helicopter to kiss you upside down atop the Tour Eiffel. Voila:


Additionally, the tie between perfume and fashion has never been more crisply outlined than in Christian Dior's introduction of Miss Dior and his "New Look" in 1947. The ultra-feminine silhouette that characterized his collection were reflected truly in the perfume's vivacious juxtaposition of green galbanum, aldehydes, animalic civet and patchouli, and a bouquet of flowers to harmonize these contrasts. By the end of WWII, Chanel as a brand was out of the picture, and was not creating any new scents (not until the mid 70's with Cristalle). Although she can by and large be credited with marrying perfume and fashion; it is Christian Dior who took this marriage seriously with a very strong connection between his brand and perfume, hiring the best noses of the time - Jean Carles for Miss Dior, and later on the equally legendary Edmond Roudnitska, who created for the house numerous groundbreaking perfumes: Eau Sauvage, Diorissimo, Diorama, and Diorella; and Guy Robert to create Dioressence. Dior has been consistently taking their perfumes seriously and naming them often with the name of the brand included. 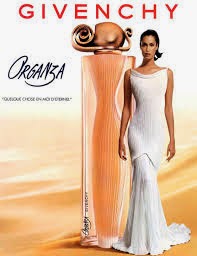 Last but not least: some bottles look like a costume or a fashion illustrator's sketch on their own right. Take Tocade's bottle, for instance: reminiscent of the Chinese straw hat and pagodas, charicaturized rather than getting the very stylized treatment YSL did in his Orient-inspired collections. Or take Ginvenchy Organza and Organza Indicence - both looking like three-dimensional glass gowns. The torso-shaped bottles of Shocking by Schiaparelli, as well as the more provocative Jean-Paul Gautier's fragrances for women as well as La Male are also both relating more to fashion than the human body per-se, tying together fashion and fragrance in a more costume-oriented manner.
Back to the top